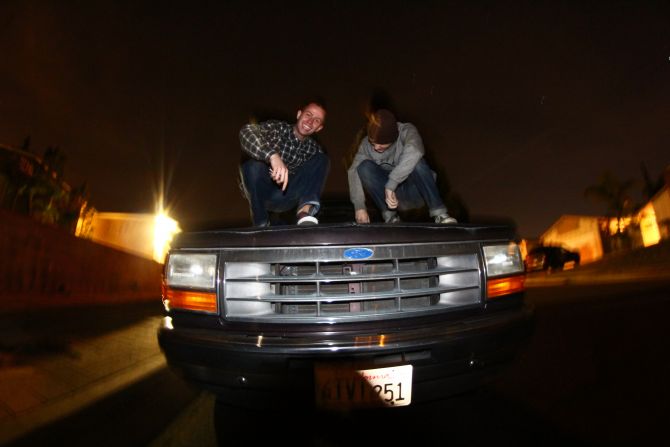 They took us to a couple of dealerships in LB, but we didn’t find anything. After getting a tip from our man Vince, we went to the Salvation Army where we found a Ford Explorer from ’93 that rides awesome and is big enough to lie down straight and sleep in it. We made an offer, skated 14th street in LB, crashed at Vince’s place down town, and picked it up for 2200 bucks the next day.

A couple of days later we had a barbecue at a park in LB. Kato came and we decided to have a bonfire on the beach in San Diego the next night. When we got there we waited for him to bring the pallets from the back of a grocery store, broke the shit up, started a sick ass fire and partied with the homeless. Next day we woke up late after sleeping on a mattress for the first time in a week. We chilled in Kato’s backyard with him, his wife and his two awesome daughters! Later Mike Tseng and his girlfriend Bree, who we met at the fire, came to Kato’s house where he cooked up the sickest paella. After eating, Jacob, Kato, Mike and I had a night session in a lit up park that had some chill ledges.

We hooked up with Bryan Bell who let us sleep on some cardboard in his garage, and hit some golf balls at the course while he was working. When we weren’t drinking or hanging out at the golf course or in B-bells garage, we went out looking for spots, including Escondido skate park with Mike, to get some clips. Finding spots hasn’t been a problem so far, because Cali is fucking packed. For two Copenhagen boys, who are used to rain, snow, shitty run-ups with granite bricks or gravel in front of whatever we skate, this is paradise. So look out for our edit that will dropping one of these days, ’cause hopefully it’ll be packed with partying, skating and road-tripping.

Besides us getting a J-walking ticket, me having my face scratched by a crazy homeless woman and having to sleep in B-bells garage, it’s all been good times so far, and if you are in Cali and want to skate or party, hit us up on Facebook! Peace, Copenhagen Expellees!

Check out all of Jacob Juul’s ‘Cali Chronicles’ parts here.