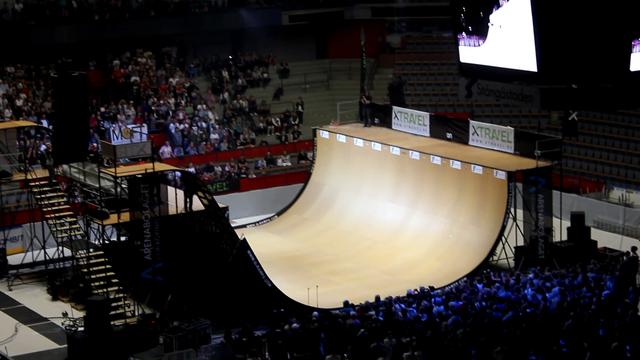 The first show started at 2:30 pm and you could hear the crowd scream and cheer from outside the arena. By then we were still doing demos every hour so we were supposed to watch the late show at 6:30 pm and I guess you could say we were all pretty juiced about it. But first we had the VIP buffé at 5 pm so we all headed inside around fiveish. After eating and playing some dice with licensed hustler Joe Atkinson we headed up to the VIP room where free drinks were waiting. At 6 pm the warmup runs started and we all screamed like mad men everytime the Yasutokos dropped in. It’s truly amazing to see the Yasutokos live and how skilled they are. Takeshi’s viking flips left me speechless.

Tony Hawk was the big thing that day but I promise you that people cheered so much more for the Yasutokos and their crazy flips and their California rolls. 6:30 pm the Yasotoko show began and it was a great success and so many kids chased them for autographs and photos and from what I heard they were really satisfied with the Swedish crowd.

At 7 pm Tony Hawk dropped in and did some attempts for his famous 900° and after about 8 tries he laced it and the crowd went crazy! Although not as crazy as for the Yasotokos. Up from the VIP room the view was priceless and we all enjoyed feeling like champs with free drinks and seeing people cheer for rollerbladers from the other side of the world. A big milestone in Swedish rollerblading history was set that day and we are all happy to have been a part of it. See you next year and we hope to go even bigger then!