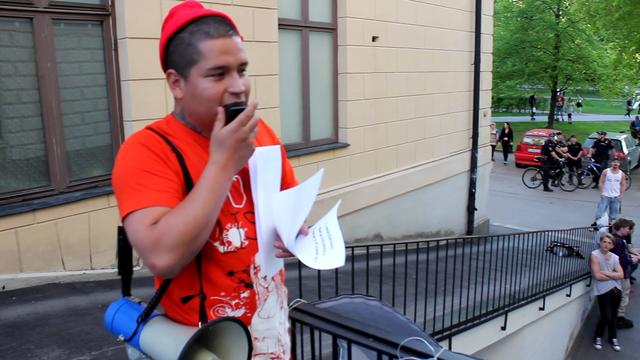 At 5 pm we arrived at the harsh angled kink rail which was the second spot and people started busting out tricks right away. Joe Atkinson reinvented the spot by skating it upwards and adding a bench to it which was really interesting to see how his level of skating gets him outside the normal habits of how you skate a rail. Joachim Wall laced a few sick trick along with Joe Atkinsons perfect grabbed backslide to kindgrind.

After about an hour we all moved on to the final spot which was a nasty wobbly handicap rail with a 5 meters drop. Joachim Wall was skating good even here as he was familiar with the rail because of previous comps we’ve had here. Also Samuel Cabezas laced a decent true mizou and Joakim Lundbergs landed a steezed back torque. After Joachim Wall busted all sorts of trick it was kind of obvious who was gonna take the prize money of 300 €. We announced the first, second and third place and did some throw-outs for the kids who had been tagging along the whole day.

In general the whole session was really good. Good weather, good vibe and pretty decent spots. Also the cops having our back was a good feeling after always being kicked out otherwise. So a big thanks to our sponsors Razors, Hedonskate, Hangaren Hot Sport Center and the local police for helping us out. See you next year hopefully!