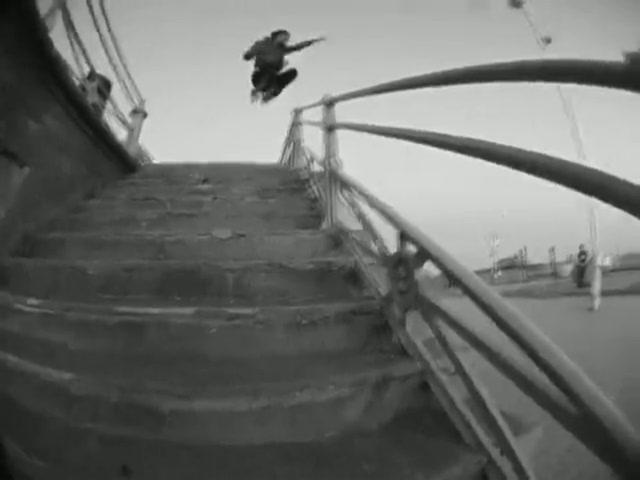 WHEN PEOPLE THINK OF THE SPANISH SKATING SCENE YOUR NAME ALWAYS POPS UP; WHY DO YOU THINK THAT IS?

I guess since I’ve been skating for so long now and as a lot of people have come to Barcelona (BCN) so I’ve had the chance to skate with them. I actually think I know at least one person from every country of Europe. Also because I always try to be a good ambassador for my land Catalunya, not Spain.

WHAT’S IT LIKE LIVING IN ONE OF THE BEST CITIES TO SKATE IN?

Awhile ago, when I was a kid I used to think BCN sucked compared to other places. You know, always thinking about perfect rails from America and shit, but when I grew up I just realized how lucky I was. And obviously I am.

THERE WAS SOME BUZZ AROUND BCN WHEN SKATING WAS FORBIDDEN ALONG WITH PROSTITUTION AND STREET ART; HOW DID IT FEEL TO PROTEST SIDE-BY-SIDE?

This unjustice pissed me off, man (like some others). From my point of view, what they tried to do was to clean up the city for tourists. They never really cared about our personal necessities but they did care about all the foreigners that came to visit my city. They would build hotels but not a single decent park in the whole city. I honestly think they forbid artists in las Ramblas so there was more room for foreigners. Such an easy way to privatize public spaces without officially doing it. Motherfuckers…

Right after the law was approved, police had to look like they were actually being strict about everything, so they were pretty strict with no way to sort things out without fines.

HOW IS THE SITUATION NOWADAYS?

Now that everybody is more relaxed you can try and deal with them somehow. Speaking in catalan always helps so that’s what I try to do. Another good thing to do is to not be in a big group of people and to also skate in the suburbs. It’s really hard to tell how things are now; I guess it depends on the mood and sexual activity of the motherfucker police you enounter.

BCN IS REALLY A COSMOPOLITAN TOWN; WHAT’S YOUR TAKE ON ALL THE TOURISM AND THE EVER CHANGING FACE OF BCN?

It’s sick man. I’ve had the chance to meet all kind of people with all kind of lives here. I still think rollerblading tourists are the best ones and the ones who are in touch with what really goes down in the city.  All of these constant visits from people from all over has really build a city with all kind of activities and lifestyles.

IF I WERE A SKATER COMING TO BCN, WHERE SHOULD I GO?

First of, las ramblas down to Nevermind Bar. Then, Forum for a nice chill session with the people and then Marina at night for a wild party.

WHY DID YOU MAKE THE SWITCH TO NIMH?

Basically, I recieved an email from Shima asking me if I’d like to rock a pair of Nimhs and I said yes right away. I’d had a good relation with USD and they helped me a lot but you can’t say no to someone like Shima.

IT SEEMS LIKE THE EURO TEAM IS VERY CONSISTENT WITH YOU, OLI AND GABRIEL REPRESENTING NIMH; HOW’S IT BEEN GOING?

I’m so proud about the team and more than that, I see we are a group of friends having fun and trying to represent skating the way we feel it should be. They’re actually my favorite European skaters so I’m so stoked to be on the same team as them. It’s curious how we’ve all known each other for a long time ago and finally ended up on the same team. Besides the three of us, there are other European riders representing the brand in their countries such as my boy Mineroh, Leon Humphries, Benny Harmanus, Remy Meister, Paco Rey, Sam Tuffnell, Matt Chilvers… They all kick ass!

WHAT ARE YOUR PLANS FOR SKATING THIS YEAR?

YOU RECENTLY STARTED A FULL-TIME JOB; HOW’S THAT GOING ALONG WITH SKATING?

Honestly, it’s fucked up in a way but I get good money working in what I’m good at, graphic design, so it’s fine in one way. It still pisses me off when I know Mineroh and some friends are skating and I have to be in the office. But I still have the weekends and Friday afternoons. In the summer it will be better because I get done around 6 so I’ll be able to skate until the light go out around 9…

AGES AGO, BE-MAG DID THE EUROTHRASH TOUR WHICH ALSO STOPPED IN BCN… AND QUITE A LOT OF CRAZINESS WENT DOWN. WHAT ARE YOUR MEMORIES?

It was when Luciano was around… enough said.

WHAT ARE SOME OF YOUR FAVORITE SKATING MOMENTS?

Too many… Pretty much every time I go out to skate. But the most memorable? I guess winning the X-Battle Barcelona was amazing. Lacing my first TTS on a rail as soon as I saw Mineroh lace one! US trip and travelling with the Ignition dudes around Europe was mad fun and then when Oli was around filming for the Nimh video was laughs.

Support skater-owned companies so we have a proper future in rollerblading. Thanks Be-Mag!