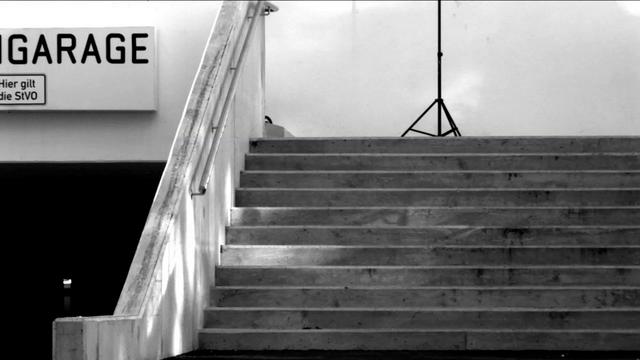 At this time, we are waiting for Aktarus and Chaz who have the keys to the Van, but we do not know where they are – they finally appear after 30 minutes. It is time to eat now, waiting for the return of the sun. The bellies full, the rain had stopped, we are back on the famous red curb to shoot clips that have not been filmed before. Again, it drags on, Rob is desperate to get one back royal on top to soyale on the end of the first level. He comes off after many attempts. In the evening, we go to bed early to try to make the most of Sunday.

Sunday, we go to Wolf’s home and then head the direction of the city bowl. The place is spacious and really well done. Tensions with local skateboarders appear soon, they did not want to share their playground. Again, rain puts an end to all this and we make our way to a restaurant like usually. Upon leaving, there is a small ledge with a rail stuck on it that David skates with an half cab top acid and an half cab fishbrain. Nicolas Auroux moves a bike range to grind it with a back royal to gap over the wall.

We move on to a kink that David skates with a very creative trick, I don’t say more, you’ll probably see his exploits on the edit. This is followed by a “chill” session on a large town square with a variety of tricks to do, but nothing special. We end the day on a low wall to go up where Adrien films a few clips.

Next day comes and we start it on small curbs – this has become a habit. The curbs are located in a kind of a fairly large park frequented by local young people. We end up visiting many spots in the area, already broken by riders who traveled in the city or by Fridolin (Eelbo), a local skater with a big destruction potential. As a result everyone calmes down quickly, not pumped to skate anymore. We end the day with a walk into the downtown to discover the local monuments. We can say that Vienna is very rich of this kind of things and offers a lot to see and visit. Unfortunately there is no more time and we hit the road late again. Direction is Salzburg.

Arriving at night, in a pretty class hotel. Perfect place to finish the tour with style. Tuesday we are searching for spots which does not exist. The premises tell us that there is not much to do here, so we go to the nearest skatepark. It is not that great either but there is nothing else to do. Warren finds a kink rail and skates it with a kick to top soul. The hours go by and it’s time to go to do some shopping for the barbecue that’s planned for tonight. Luckily, there is a nice ledge at the supermarket nearby. David and Chaz skate it while the others empty the butcher of the supermarket. Meat and BBQ bought, we go to the chosen place of hostility, the heights of the city, just to have a nice overview of it. One of our guides tells us the way forward without knowing that it is blocked before the end. After a few miles, we are stuck in a street with no way to turn and where a car must be moved if we want to go by. We try to move it with 4 or 5 guys. We get help of people sitting outside a pub nearby. After starting the discussion, it appears that the boss is Belgian and he does not hesitate to pay us a round of beers. Then a second round, then spends much of the evening in the bar. The boss has even given us the opportunity to broadcast the first edits of the tour on the big screen in the house. At 11 pm, we finally head up the hill to the famous barbecue. Akta, master of fire, manages to get a good fire going with style.

The following day is spent almost entirely on the road. Arriving in Strasbourg, the weather is awful, we won’t get a session going that day. On Thursday morning, we start slowly to reach Paris, where the bus stops at 17 pm at Nomades, right on time to an appointment that was set. Heads full of memories, everyone is happy to have spent 14 incredible days throughout Europe.