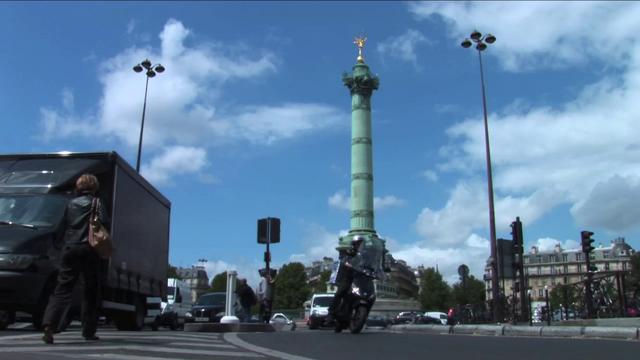 I also like European cheese. Mozzarella in Italy is the best. Bread, cheese and meat in Europe is a lot better then in the states so I have chosen a good place to pick it up again. I don’t think I will eat it when I am back in the states and still think being a raw vegan is a good choice for health, but I am starting to realize a lot of things about myself on this trip and am questioning many things about myself in general which I believe can be the healthiest… sometimes.

So, back to Nomades Tour. This is a picture of Warren Digne who invited David Sizemore and I on this tour. Much respect to Warren and Nomades Skateshop in Paris! It has only been a few days but it has already been a lot of fun so far. Our first day was spent going to Nomades Skateshop where there were many kids waiting for us. This is the photo I took with my iPhone using the ever so popular Hipstamatic application. I have found that if I stand back far enough I can allow myself enough freedom to zoom in with my iPhone and take a screen shot of an even better photo minus the default outline of Hipstamatic which may after some time get a bit annoying.

Here is a pic of the dudes that were at the shop waiting for us. Nomades had drinks and food set up as well as skate videos playing. We all hung out for a while, signed autographs and took photos. David and I also decided to mess around on the scooters they had. Scooter world is huge right now and the new scooters they are making are built pretty hardcore. I landed a 180 in the shop and David landed a huge belly flop. I’m not sure what he was really trying but the belly flop brought laughs to all so I say it was worth it.

Outside Nomades, I was learning to play “Postcards from Italy” by Beirut and right around this point is where I began to sing and play at the same time which felt amazing. Adrian Anne came over and put a hat down next to me with 20 Euro Cents to get my street musician career started. I don’t think this is such a bad idea. It would be like putting a hat down every time you decided to go out and skate street. I might try and do this when I get back to NY…

Outside we were doing interviews for the tour. Here is a picture of Nico and Aktarus answering questions while David is pondering:

David is a man with a vision, so he’s always pondering something.

On the wall inside the shop they had an article regarding humans experimenting with wheels on their feet. I can not read french, but it seems to be a really amazing history lesson in our roots and the basic roots of all humans who love to roll. If anyone could translate this and email it to me I would be extremely grateful!

Also on the wall in the bathroom was a Valo poster of Jon Julio with an afro reminding French skaters that it is always Ride O’ Clock.

Three things you will always find on a menu in Europe are:

I just want to thank Europe for always having fizzy water on tap.

Here we are grabbing breakfast the next morning in Montpellier after an 8 hour drive from Paris. The drive itself wasn’t bad at all and actually was a lot of fun. Everyone on the bus participates in singing, dancing and just all out raging. This is looking to be one of my funnest tours yet. And yes, “funnest” is not a proper english word but I am in Europe and my English has been far from proper.

Me and Warren Digne, Ultimate Chest Contest. You decide the winner.

After a drive and a short hike we arrived at a bunch of broken down and abandoned buildings. Inside the building to the left in this photo was probably one of the coolest skate spots any of us have ever skated.

Here is a panoramic shot of the inside of the building. If I can remember the story correctly – which was told to me by Montpellier local oldschool skater Kevin – there was a skate shop and in front of the shop they had a donation box which people threw change in to raise money for the cement for the park. I thought this was a really cool idea that more skate shops should probably do to raise money for things like p-rails or launch ramps. The skatepark section of this building was surprisingly clean for how dirty the rest of the building was and although some of the transitions were a bit sketchy overall it was built really well.

Aktarus and Nico immediately started to attack the park as you can see by this picture of Aktar lacing this grabbed wallride high above the pool coping. Nico seems to skate the park with the most ease and although I had a hard time adjusting to the transitions and finding something fun to do, each one of us left with a clip and an overall great time. The fact that we had to drive all the way up into the mountains and then hike to the bowls made it very special. David and I truly are lucky to be on this tour having such fun sessions and seeing the many beautiful landscapes Europe has to offer. Thank you again Warren and Nomades!

Another picture of the building with the bowls. As you can see there is graffiti everywhere and there were dudes there tagging up one of the walls where we were skating.

When we were leaving Akatarus found this insect. I don’t know which insect it was, but it definitely looked super alien.  I always look at insects and think that they must originally be from other planets. they just look soo much crazier then anything else on earth. Actually, I just think Earth is a crazy place period.

And that concludes our first day of skating. We also went to this INCREDIBLE ledge spot with coping built into them which you will see footage of soon. So far tour has been nothing but laughs, dancing, adrian opening the Van door to holler at any and everyone, lots of paninis and pizza, Pellegrino all day, and ill bro downs. This is definitely one of the best tours I have ever been on. I love Europe.