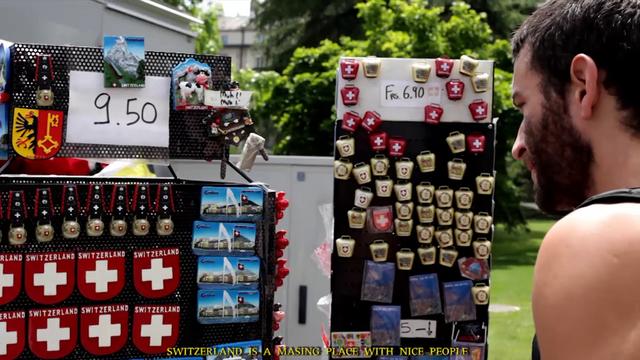 We arrived in Annecy late in the evening and decided to go eat at a bowling alley, since it was the only place still open at this hour. Mathieu took the opportunity to interview our skaters about the tour so far. We stayed at the bowling alley until it closed and then got some sleep before our day in Geneva. It’s June 21 and today our team manager and driver, Yannick Clatot, is leaving us after one week on the tour. We must drop him of at the Geneva train station before 12.30 and as usual we are running late. We get to the station at 12.25, just in time for Yannick to jump onto the train that will bring him back to Paris. After dropping of Yannick we went looking for a rental boat to spend some time on the city Lake. We couldn’t find a boat that could carry 7 people, so we decided to just chill on the beach. Acces to the beach cost us 2 euros per person. It seems like nothing comes for free in Switzerland.

Once the team was settled, we met up with Stefan De Freitas in the family bar where he works. When his shift was over, we refueled at the nearest kebab. Then we hooked up with Nicolas Shopfer and went to the the first spot. Everyone warmed up on some small curbs before attacking a slightly bigger ledge. Everyone did some cool tricks, but once again it started raining. Bad weather seems to be following us this year. Some of the guys decided to go to Mr Shopfer’s bar. I went along with Mathieu, Warren and Stefan De Freitas, looking for content to fill my camera. The session was productive: Warren offered us a nice 180°gap and Mathieu dis his first kindgrind on a rail. After the session we joined the others at the bar. We had a little improvised party and did some dance battles in the street. At around 1 am we started the 60 kilometer drive back to our appartment in Annency.

The next morning, Warren drove back to Geneva to pick up Lionel, our official driver for the next week of the tour. In the meantime we went sunbathing on the shores of the Annecy lake. It’s a great place to relax. A rowing instructor even let us use a kayak just for fun. When Warren and Lionel returned we took a group photo on the pontoon to capture the moment. The day was well underway and we were already supposed to be heading for Barcelona. Too bad for the Catalan capital, but we had to change our plans. We deciced to skate the Annency bowl and then head up to Narbonne to stay at Nicolas Auroux’s house. At the bowl we got a warm welcome from the locals, who were surprised and happy to see us! After the session we distributed some Nomades Wax and tour DVD’s and signed some autographs, then we got back on the road.