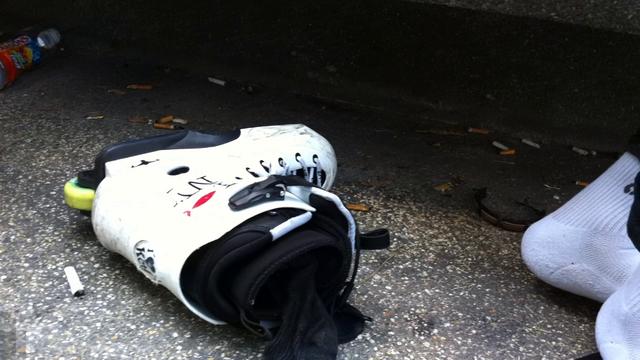 One Day In Kuala Lumpur with Nik Suhaili

After spending much of his childhood in Switzerland and Kuching, East Malaysia, Nik Suhaili recently made the move Kuala Lumpur, the nation’s city capital, and has been destroying skate spots and placing on top in almost every competition in the country. His tall, lanky and fluid style earned him a sponsorship from USD via Wheel Love Skateshop, of which I co-own.

Malaysia’s most identifiable landmark isn’t only the tallest twin towers in the world but also houses a shopping mall, aquarium complex, park, public swimming pool, symphony hall and some of the best street spots in the city.

Nik flosses through a negative makio on the ledges at the foot of the towers and proceeds to stale 180 the nearby bus stop’s roof to roof.

Alongside futuristic skyscrapers lies the soul of Kuala Lumpur. Pre-World War II buildings, leftovers from the British colonial days now house everything from Indian silk stores, Chinese herbal pharmacies to Malay restaurants. It is where you’ll find the everyday KL-ite.

With legs that start at his neck, lacing this chest high topsoul first try isn’t that big a deal. The soft and shaky plastic thrashcan was also front torque’d without a sweat.

The iconic Dataran Merdeka or Independence Square and the Sultan Abdul Samad building nearby played a big part in the nation’s birth. It was where the British flag was lowered and Malaysian flag was raised for the first time in 1957.

The flat bars across the road from the Moorish inspired Sultan Abdul Samad building deserves patriotic frontside full torque followed by a stale wallride at the base of one of the tallest flagpoles in the world.

Seen from the sky, KL is one green blob dotted with building tops. The one thing we’re good at is planting trees. With year-round sunshine and rain, they pretty much will grow anywhere.

The Perdana Lake Gardens is just one of the many green lungs in the city.

The National Planetarium’s sundial is just asking for this fishbrain stall.

For bladers by bladers, we’ve even claimed the nearby alley way by building copings and angle irons on every surface.

The fact that Malaysia has more skateparks than most Asian countries may come as a surprise to some. We’ve got parks in almost every town and city in the country. Best of all, they’re all free to ride.

The Mont Kiara Skatepark is semi-sheltered and provides shelter from the almost daily rainfalls the city is famous for. Nik takes a break from the city heat with a lofty mute air and 540 spine to ramp transfer.