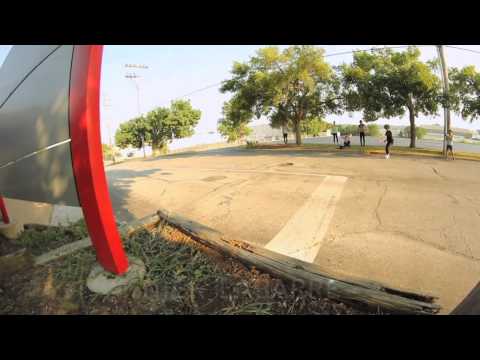 About the DVD, what first struck me as an interesting detail was the fact that there is no menu to it. I´m not sure if that was the idea behind, but not having an actual menu provides for an oldschoolish VHS touch, which I sort of enjoy. Plus I guess AJ saved a few bucks this way. The same goes for the clear case the disk comes in. Since the DVD itself has got a sweet print on it there is really no need for an extra booklet or cover, some might disagree with me on this aspect but, if you ask me, more often than not, keeping things simple is the best way to go.

How shall I continue from this point onward? Taking constructive criticism into account when it hits me, I don´t think I should go into detail on each and every profile as I did in earlier reviews. Instead I´ll just try and concentrate on my thoughts and impressions that surfaced when first watching Pariah. Straight from the get go, like within the first 5 minutes of the flick, you´re made fully aware of where things are headed with this video. The riders and videographers seem to have been extremely picky about spots and tricks, trying very hard to portray rollerblading the way they feel it has to be. Pariah is a 100% pure bred street skating video. AJ´s earlier statement that this time it would be `All killer – No filler´ describes it best. People predicting Pariah would be another `Pirate Movie´ showcasing seemingly bored pros skating ankle high ledges will without a doubt be well silenced by the massive comeback of the craziest gaps, darkside variations, sub bar grinds and all kinds of nutty wall ride combos. It is always great when a DVD caters new perspectives on skating to the viewer or introduces lesser known, but highly talented rollers to a bigger audience. In this case I want to highlight Dylan Davis´s and Nick Labarre´s outstandingly entertaining split section. Both riders have very distinctive and unmistakable styles added to the ballsiest hammers resulting in a great opener for Pariah.

As the line-up is packed with some of the world´s best rollerbladers, ranging from BFree to Marc Moreno, Michael Garlinghouse, Chris Farmer, Montre Livingston, John Bolino and Alex Broskow, it wouldn´t be of much use to point out what makes every single section oh so special. I´d rather like to go into detail on what makes Pariah as a whole stick out from the mass that is other videos, music selection and imagery composition! In my honest opinion the Pariah soundtrack is one of the best, if not the best, to date. Please don´t get me wrong here. Not every single track tickles my personal musical gusto! In fact, I´m usually on the Beat and Hip Hop side of the fence and still I can´t but appreciate the great track choices made for Pariah. Since it is kinda hard to describe what I´m aiming at all I can do at this point is recommend you watch Ross Kuhn´s section. Rodriguez´ `Hate Street Dialogue´ complements every aspect of his skating just so very well that you will immediately understand the importance of music selection in a rolling vid. For Pariah as a whole it´s safe to say that in every section the composition of rider, rolling style and tune is exquisite. Sure it´s a lot of rock and roll, but people buying Pariah are probably aware of the fact that it´s not Hyphy IV (no hate intended – I love the Hyphies).

Even though I don´t think people need another reason to cop Pariah I´m going to go ahead and dish out the Soundtrack. It won´t really tell you all too much about the magic inside, since as I said only all components put together spark the fire, but maybe it will get you even more ready to cough up a few bucks for a great video.

What I´d like to mention before I call things a wrap is that, even though Pariah clearly is an Adam Johnson trademark product, the differences to his latest videos e.g. `Charging´ and `On Top´ are the things that lift `Pariah´ on yet an even higher level. The entire flair and especially the skating itself is completely different. Still, if you understand it as a sequel of Adam´s work as a videographer you´ll probably come to the conclusion that it is a result of natural progression. AJ and his contributing camera men have once again done an outstanding job and even though, due to some unfortunate events, `The 20 Project´ had to be canceled, it was probably for the best since a lot of clips were added to the `Pariah´ footage making it the amazing piece it is.

Not all too much left to add here I guess, except that there is no better proof for a video´s quality than happy customers. That being said I´d like to include a lil´ anecdote before I relieve you of the drag that is my writing. A few days ago the guys at Camp Woodward wanted to know (via an FB poll) which the best rollerblading section is to date. And what did people state right next to `Dustin Latimer – Brain Fear Gone´? `John Bolino – Pariah´! Nuff said!

Pariah at the Be-Mag online shop

After writing the review for Pariah Lukas drew this little sketch – obviously still influenced by the video. Just a little extra something we thought you´d like and that would remind you of someone!