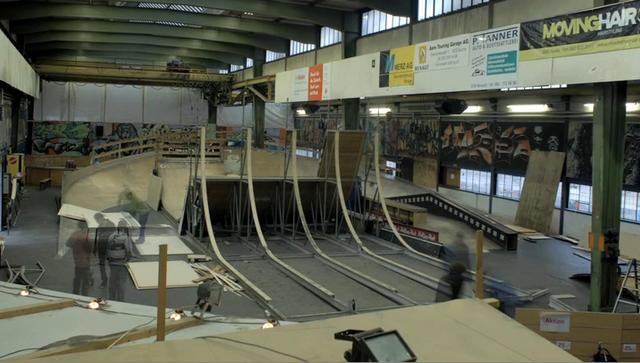 After 13 years we decided to get rid of the vert ramp and build something new. The skatepark staff has been thinking about re-launching the park at a newly built location for quite some time now. But after they realized that because of many different reasons the new park wouldn’t be realistic for three more years to come, they decided to rework the existing one.

Since we could not get rid of the round course (family sunday brings in all the muhnayz) we skipped all hopes to install some street obstacles and went on to build a mini ramp. Interesting fact: this is the same mini ramp that was present at the Hypnotic skatepark back in the day. Fun fact for all the OG’s who still remember that one.

It took us about 8 days to build the ramp and we’ve added a lot of extras like an extension with pool coping, a channel with a bank (for extensive kickflip-sessions) and an extension with 5 meters in width. We also added an incredible high wallride. There wasn’t much planned previously, we decided to do a lot of those additions spontaneously during the building process.

The mini ramp was built mainly by a group of 3 people with help of 10 others. The amount of skateboarders and rollerbladers was even. There were two people present that do woodwork for a living. So far it looks like it was worth all the work. We think this obstacle will serve the skaters that visit RR skate park for quite some time.

The time-lapse was produced using a Nikon D200 with a 24mm lens. The camera was set to take a picture every minute at a shutter speed of 1 sec. This rather long exposure was necessary to achieve the eye-pleasing motion-blur effect that can be seen in the edit.

The only element of uncertainty was the sun that decided to look through the clouds without warning a few times. Thankfully, this resulted in only a few over-exposed images that could easily be corrected in the post production.