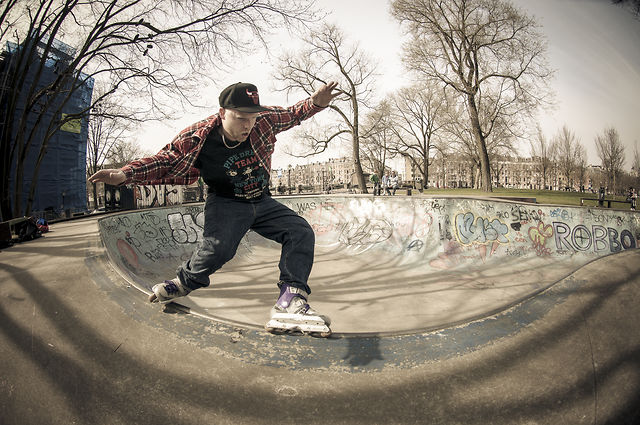 The founding member of the infamous Dutch rollerblading wolfpack known as UH44 started his inline career in 1994, which means that while most pros today were sucking on their momma’s chest, Remy was doing the same with his first girlfriend. Only two years into the world of rollerblading, which at this time seemed to be taking the world by storm, the Dutch stuntman was quickly adopted by the biggest of skate companies as a professional rider. Over the past sixteen years, Remy has represented for Roces, Rodolfo’s, Irie Daily and Rollerblade, among others.

His all-round skills in the half pipe and on the streets were righteously rewarded and hailed by the biggest of companies and fellow pros. Although big brands are nice things to rep, nothing has been more pushed to levels of notoriety by Remy than his crew mentioned above, the UH44. This Amsterdam-posse of absolute nut cases was formed in 1998 by Cadier and long-time roller-in-crime and good friend, Nils Jansen.

The men of UH44 have left their footprints in the rollerblading scene worldwide; guiding Sven Boekhorst from a young pup to one of the world’s greatest rollerbladers, producing arguably the best Dutch inline flick to date, ‘LOMP’ (2006), and simply ruling the inline scene this side of the equator from the mid ’90s to the end of the last decennia, organizing now historic vert comps, pushing the best edits and making sure the police has a full time job to do.

Remy will be marrying his lovely fiance Kitty shortly, and I think I speak for the entire Dutch scene when I wish him the best of luck and countless happy moments together. Even as a married, thirty-five year old, washed up junkie for hash and beer, I foresee a bigger chance of Remy moving to Rotterdam than putting in less time, effort and love into this passion that we all share. Big up Remy, happy 35th from all Dutch rollerbladers, even from Rotterdam!