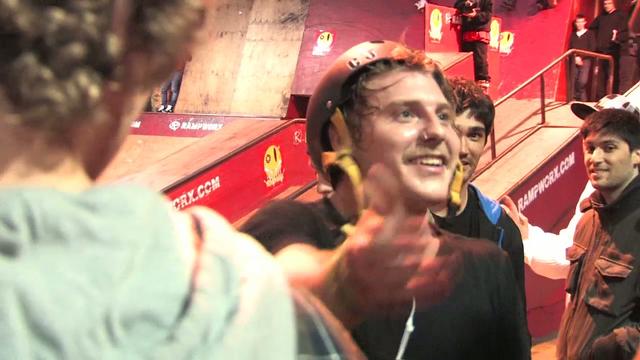 The Chaz Comp!! Main reason why we are all here in the UK, we all looked forward to this.

Following that crazy first day in Manchester and first night in Liverpool, the first day of the comp was practice. Chaz Sands himself came right out to greet us in the parking lot and Matthew Dearden from Rampworx was there at the door with the magic blue bracelet that gets you into the after party at the Cube in Liverpool the next evening and gives you access to the VIP room at Rampworx, which is where we all headed right away. Couches, games, pingpong table, computer room, you know Chaz knows how to make riders relax properly in between sessions.

Inside the park some of the Remz euro riders were having a skate, like Nils Jansons and Maxime Genoud. These two kept killing shit all weekend long. Nils I remember particularly was all over the place with some serious style and control hitting hammers non-stop like that 3 fish and darkside hurricane on the Aframe and various 3 and 450 disasters on the grind box and middle rail.

Looking forward to spend more time with him as well as maxime and the others in the future and on tours.
Check the edit featuring the UK Remz team as well as Nils Jansons (Latvia) and Maxime Genoud (Switzerland), there is some really hot shit in there:

Day went on sessioning although Franky couldn’t skate because of a knee injury the day before in Manchester (the same knee he f… uped in Florida during the last tour), and the next day came the actual contest. The Ams and the girls took shit to a good level, and when the pro comp started everyone gathered to the course and things started to get serious.

We’re listening to a soccer match commentaries on the radio right now as we drive and I write this update and I’m not trying to comment everything that went down at the comp the same way. One thing i will say tho is that CJ did not only win the Chaz Invite, he crushed and destroyed it. After his last hammer (the disaster topsoul on down kink ledge) everything was clearly ova fella! fack yea mate!

Most of the riders present at the comp met up afterwards at this club called the Cube in downtown Liverpool, featuring a packed bar and girls with fake tans in cages, liverpool people arent kidding around when it comes to party. But we knew that.. We walked back home to the hotel with the sun, as usual, around 7AM, with a happy and raging CJ not trying to go to bed. CJ man of the day!! BIGUP

Keep your eyes peeled for the next (third) update which will be released within the next hours. So we are back on track!