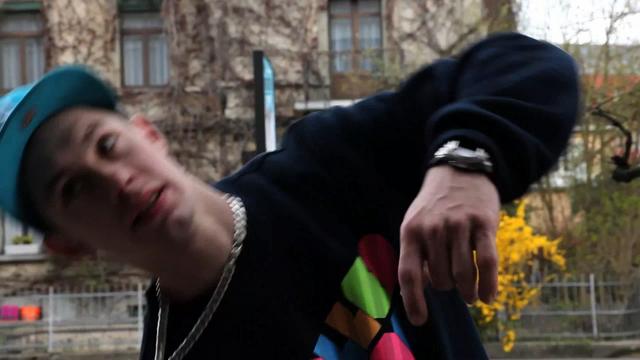 Wednesday 14th april
At 9 p.m. (Tuesday 13th of April) Timmy arrived at my house to chill with Steve and me. The plan was to depart to Switzerland around midnight because in the morning we planned to meet Sami to get some new skates and some other products.
The nightride through Germany went pretty fast because there were almost no cars on the road. We arrived an hour to early in Stans, Switzerland. After we got the products we headed for the Zurich Central Station to meet Warren and Holger.

Filled up the car again

Again we arrived an hour to early so we searched for some spot to skate a bit already. We found a pretty cool curved rail. At the station we couldn’t reach Warren or Holger because their phones were not working but as soon as we got to the main entrance we found Warren, he was already waiting there, but still no sign of Holger. After waiting for some time we decide to go to a starbucks to go online and find out where Holger was, finally we found a way to reach him using Timmy’s phone because mine was not working as well. Somehow we misunderstood in the days, Holger was still in Munchen and thought we should meet on Thursday. The wheather wasn’t nice so we drove to closest indoor skatepark: Winterthur, where we first found a nice hostel with some cool skatespots in front. Hopefully we would be able to skate these tomorrow if the weather was going to get better. After eating at Burger King, we went to skatepark to have a nice session with some local riders. They told us that Wednesday night normally is the inline night.

Steve and Warren did some nice lines on the streetcourse and Timmy was having a good time in the miniramp. We stayed there until midnight. Everybody was really tired from travelling so we went back to the hostel to sleep. Holger sent me a text message that he was going to arrive in Winterthur around 11 a.m..

Thursday 15th april
Timmy and me woke up at 10 a.m. to pick up Holger from the train station. When we got back Warren and Steve were also ready to skate. We started at the spot in front of our hostel Steve started with some fakie bio’s and a nice 720 out of the quarterpipe. Warren ended up with a nice tree stall. Nice shot!

After that session we really needed a breakfast, not the best breakfast but we went to some local kebab to get some food. In the meantime it was already 3 p.m.. We decided to drive around Winterthur and look for streetspots. There are a lot of mountains in this area so we were hoping to find some good spots. In the end we found 2 pretty nice spots. The first spot was located at a kindergarden school with a curch next to it. Timmy Vanilli did a nice back full torque up the rail and Steve and Warren we were sessioning the tabletennis table. The second spot we found downtown was a pretty nice kinkrail that was going in a circle. After me trying to many times the camera run out of battery but Timmy was able to film it with his Blackberry and Holger got a nice shot.

Everybody was pretty tired and we made our way to the hostel to chill for a couple of hours. Everybody felt asleep except of Timmy who woke us up around 8 p.m. to go to the indoor skatepark again. Steve found a nice trick the day before that we really wanted to do again for film this time. After some skating in the park the camera ran out of battery again but luckily Holger was able to film his trick with his camera. Steve did some transfer to transfer to transfer. 1. Acid to 2. Acid to 3. Alley oop top acid. Probably the trick of the day.

Around midnight we went back to hostel but on our way to the hostel we stopped at the kebab place again to get some food and drinks for in the hostel.

Friday 16th april
We had to check out of the hostel before 10 a.m.. So everybody was having a hard time waking up that early. We decided to go straight to Milan, Italy. Before that we first spent all our Swiss Franks at some local bakery where they were serving the best croissants. Before departure to Milan, Holger had to go to a pharmacy to get some painkillers. He hurted his back while skating the bowl in the skatepark.
The trip to Milan was really nice, some of the views were amazing. On the way we found a really nice rail with a nasty drop. Steve pulled a soul, second try. Timmy did a nice miszou and Warren finished the session with a nice top acid.

The closer we got to Milan the weather was getting worse, when we got to the boarder (Switzerland – Italy) it was raining really bad. We still didn’t know where to sleep but we planned to meet Aberto (organizer of the contest) in the skatepark. He gave us the address of his friend Jean Pierre, where we could sleep. The communication between us and Jean Pierre was really hard because he didn’t speak English but everything was good in the end. He gave us the key of the appartment, which was a bit small for six people but the only thing we needed was a bed. Unfortunately for 2 guys this was going to be hard. After using some translation websites we could talk a bit with Jean Pierre and explained us how to get to the city centre by bus.

Saturday 17th April
Because sleeping on the floor is not one of my hobbies I already woke up at 7 a.m. in the morning and I couldn’t get back to sleep. So I checked some e-mails and skatevideos on my computer. Holger went with Jean Pierre to the local supermarket to get some coffee, croissants and bananas. We prepared all our stuff and went to the contest. I took pretty long before the actual contest really started. During his warming up Steve was trying his top acid on the subbox transfering to the rail going down the flat bank and Warren was going for a soul grind on the high rail to soul on the subbox to soul on the rail, almost making it.

The level of the amateur prelims was high so it was fun to watch, the pro prelims started around 7 p.m.. I was in the same heat as Steve, Warren and Matthias Silhan. During practice I skated to much and in combination with an ankle injury I didn’t land a lot of tricks. The other people in my heat all advanced to the final. Steve skated too much during the day and couldn’t skate in the final anymore because he was to tired. His place in the final was taken by the skater that just didn’t make it to the finals.

Sunday 18th april
We woke up around 12 o’clock in Jean Pierre’s appartment, cleaned a bit and went in the direction of Zurich. Here we had to drop off Holger because he toke the train back to Munich from there. After that we had a 7 hours drive back to Holland. When we arrived, Timmy went back to his hometown and Steven and me got our stuff and went to my house. End of tour!