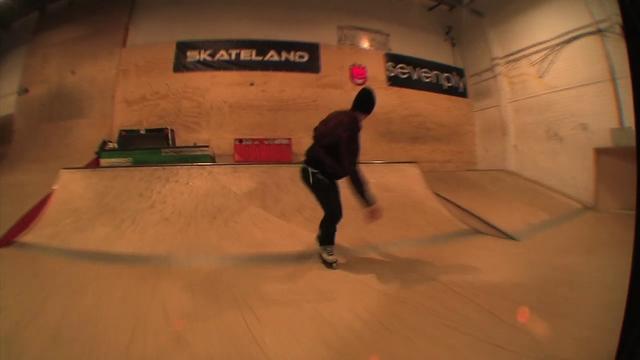 Rollerblade AM Tour through the Netherlands

The plan was to pick up Guillaume from the train station in Rotterdam early in the morning. But I got a text message saying that he will be arriving 12 hours later because he missed his train. We decided to meet at Amsterdam central station later that night. Me and Timmy Vanilli were waiting on the other side of the canal while Cavin was looking for Guillaume at the station.

Cavin found him and we went to Randy’s place for some pizza and to drop off the bag as we were going to sleep there that night. After the pizza’s we took off to NDSM skatepark in Amsterdam.

We had a fun session on the little rails. Only the floor of the skatepark was really slippery. We skated until 10 pm and went to Randy’s house afterwards. Before going to bed we checked the newest dutch skate video Aorta.

We woke up early and drove to Rotterdam Skateland. I spoke with the owners of the park and they were willing to let us skate the park before it opened. Which was cool because we had the whole park on our own for 7 skaters. Dick Heerkens and Adil Farhouni also joined the session.

After some sick tricks we found out that the weather wasn’t as bad as we thought. So we decided to go street skating. First spot was a pretty long rail and there was a lot of wind. First guy doing the rail with a topsoil was Timmy. I said to Timmy he would get 2,- € if his second trick would be a sweatstance and 2 minutes later Timmy did a sweatstance perfectly on the rail and I lost my 2,- €.

Than Timmy said he would give his 2,- € to the first guy doing a true miszou. I also put in 2,- € again. Adil heard he could earn 4,- € for this true miszou and went straight to the car to put his skates on. Didn’t wait any longer and did a true miszou on the rail without any practice what so ever…

Next spot was a nice kinkrail. At the end of the session Dick dislocated his vinger and had to go to the hospital with Dominic.

We already were on our way to Eindhoven when Lukas Merkle arrived there by train at 5 pm. After a small pit stop at my house we went to Area51 where we met Timmy and Adil who picked up Lukas.

We had a nice session at Area51 with everybody later that night. Dick and Dominic came back from the hospital to join the session for a bit.

That night we went all to our local sleeping spot. Dominic went home, Dick went back to Amsterdam to pick up Maxime in the morning. Randy, Timmy and Adil went to Minime’s place who is living in Eindhoven and I went home with Lukas, Guillame and Cavin.

That morning we were hoping the weather would be good enough to skate some street. But unfortunately we had to spend all day in skateparks. The first skatepark we went was Ladybird skatepark in Tilburg which was on the way to the Forward Freestyle skatepark in Roeselare, Belgium. The session in Tilburg was fun and I was happy I could skate again because I fell pretty hard on Thursday in Amsterdam.

The way to Roeselare was a nightmare because it was raining the whole way which was annoying. When we finally got to the Forward Freestyle skatepark all the other riders were already there. Everybody was having fun on the ledges and rails. Timmy was trying some flips in the foampit and Guillaume was doing some really stylish grinds down the ledges. Lukas did some of the most steady fast slides I’ve ever seen and Maxime was going lose on the jumpbox. Dick, with his dislocated vinger still, was helping Cavin with filming and Dominic was taking photos of Adil and Randy doing some technical grinds on the ledges. I managed to fall on my hip again. No skating that day for me anymore…

I went in the back of the skatepark where they have some seats and a TV to chill. They were celebrating Jeremy Suaraz’ 23rd birthday there so we had some champagne. After a few hours everybody was pretty tired from the whole day of traveling and skating but we had to drive all the way back in the rain still. After making a small McDonald’s stop at the border we got home around midnight. Next stop was Den Bosch city!

After dropping of Guillaume at the train station we went skating with Lukas and Maxime in Den Bosch local skatepark where they did some tricks. Everybody was pretty tired of the long day before.

We decided to go to Area51 again that night for a small session. Lukas had to take the train on early Monday morning so we didn’t stay that long.

After waking up pretty late we only had time to go to a small rail in Eindhoven with Maxime to have a small street session. Because his flight was leaving at 8 pm, he had to take the train at least at 5 pm.

It was a fun weekend with all the RB riders, we visited a lot of skateparks. Hopefully next time we will have better weather so we can do some more street skating.

Check out this edit the Rollerblade guys produced during this tour: