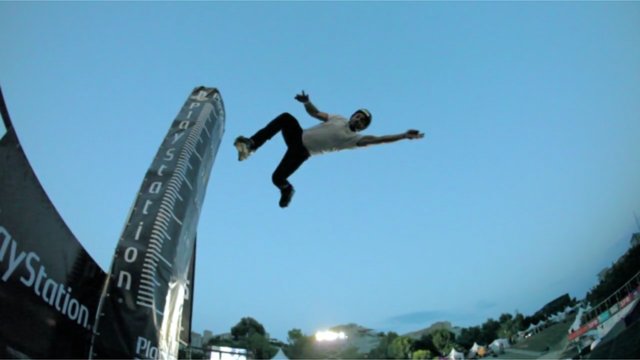 We stayed at the bar till it closed. Rob fully attacked the dance floor leaving the Frenchies with some moves not even MJ could handle. Sven and I talked to a fellow biker from Holland about how apparently the day prior, a biker did not succeed in clearing the mega ramp, breaking both wrists and ankles. Eventually, we made our way back to home base for some shut eye. When we woke up, Rob, Greg and I went to the water to see what France had to offer. Rob and I started a contest to see who could hit a buoy with a stone, loser had to swim to it. I guess Rob had failed to mention to me his superhuman skills of stone throwing, but I lost within a couple tries and headed for the tide. The ice water did not feel that bad until Greg decided to throw his new Gopro to me, getting lost in the thickest water existing on planet. For about 15 minutes we searched and searched as the freezing waves taunted us. Finally I retrieved the son of a bitch and swam the camera back out to the buoy for a glory lap.

After all the horseplay, we all got ready and headed to the event. We spent the whole day walking around meeting up with different bladers. We met all the dudes at Click ‘N Roll Skate Shop and had a good time hanging with them. A couple kids informed us about a street contest, so we decided to attend. They made a stair ledge with some coping on it, and even though the ground was slippery wooden planks, it seemed to go off without a hitch. I decided to put my blades on and put my two cents in for a couple sweaty 3s and mizus. It was cool to be in a hyped environment, surrounded by bladers.

That night, Sven, Greg and I were hanging out on the porch of our bungalow drinking some whiskey, listening to some “Sugar Magnolia”, when we happened to notice some ladies next door enjoying a good meal. Eventually, we brought the tunes over to their territory for some extra French company. After a couple hours we all then went into town for some food and came back for bed.

Finally the final day came, and unlike the other days, the rain didn’t. We got a call that the spine contest was happening, so we headed over. I felt horrible from the day before due to not stretching, so from the get-go I was aching. Svenergy on the other hand was boosting forward 5s sky high, skating like a true ASA champ. I happened to catch a nice couple backsides Fritz put on the table. A French blader and good friend of mine, Guillaume, also did some nice fluid lines that were just fun to watch. I did a couple moves, but overall never really got warmed up before I ran into Matias Silhan going mach 5. I thought it was a traditional get the wind knocked out of you moment, but as I walked it off, all I remember is waking up to some random EMT dudes and Rob standing closely over me asking me where I was from. I responded with a clear cut “I’m from America!”, but they didn’t  find it as funny as I did. Then doctor came and gave me a little rundown of things to do if I start compulsing or profusely vomiting. I happened to catch his name, Bruno, which I thought was kind of funny, especially when he lit his cigarette.

After all that was over, Horn and Mathias came over to make sure I was good, and we ended up walking around a bit. Unfortunately, in the collision Mathias’ ankle got wrecked so he couldn’t skate. Rob came and found me after he got done blading and we went and snacked on some Nutella crepes as we waited for the rest of the event to finish. We caught the last bit of the big air comp, and watched Jeremy handle shit like a rockstar. After Sven collected his checks for 2nd, 3rd, and 4th for the various contests, we headed back to the car for a drive through the night to my paradise… Italy.

Thinking of joining Team Rollerblade on one or more of their tour stops to hang out and skate? Find more info about the tour over here.