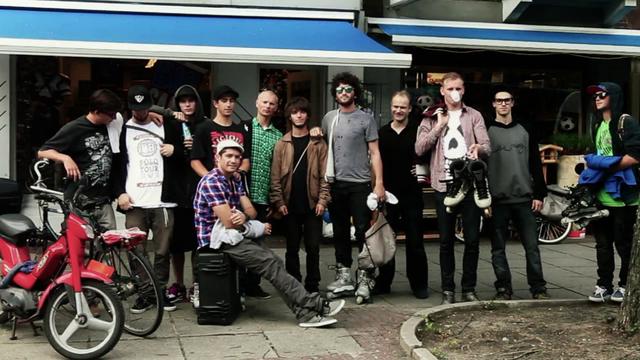 07.09.2010
According to our schedule we planned to have a chill day. But everybody was down for a small skate session. As it was raining we were meeting the guys from Eindhoven at 15:00 (3pm) in my local skatepark (Den Bosch: World Skate center). As the park was closed and we had the key – you can imagine – we had some good session. Later that day the wheather changed and we went outside to shred the street. Steve did some sick truespin alleyoop makio on a rail while Rob and David were doing X-grinds at the same time on the rail with funny faces. That night we had a reservation in a studio to take some nice group photos and shoot Rob’s promo for his new skate. After the pizza Dominic and Greg were filming and taking photos of the team. Dominic found some kind of a round flash that made us all see circles for almost 30minutes (pretty strong flash). Around midnight Rob got his last lines on tape so we were ready to head back to my place.

08.09.2010
We had our first shop visit at 13:00 (1pm) at Burnside skatepark which is about 1 &frac12; hour north of Den Bosch. I don’t go there so often ,but it’s always fun to see the guys and skate the park again. The day before I had a conversation with Greg about the team and we were also talking about some upcoming riders. He named a skater called Guillaume le Gentil. So we were checking some edits and I decided that we still had one spot left in the car. So after some phone calls he came over and we picked him up just before we took off to Burnside skatepark. David was having fun in the small outdoor concrete bowl while the rest was having a fun session inside the park. Around 17:00 (5pm) we stopped at MC Donalds and still had some time for street skating. We ended up in Arnheim where David found a big drop to flat bank which he killed after 3 tries.

09.09.2010
As the weather was not really supportive we decided to wake up earlier so we could have a session before the first meeting at Skatezone, Amsterdam. It was the same double set where we skated one year ago with Rob and Tom. The session was almost finished but Rob and David left to some other spot while we were taking the cars already. Around the corner we found Rob in a lot of pain, he missed a rail and fell hard. After our meeting at Skatezone we went to Ijburg, Amsterdam. There we skated a nice flatrail and some sick ledge which Warren killed with a textbook sweatstance. In the meantime I picked up Tom from the airport so the squad was complete. We decided to go to some low long curb where everybody was able to skate. Guillaume le Gentil was skating really hard and everybody was amazed about his skills. Remy Cadier was filming a bit and after some tricks he already had enough tricks to make a sick One Minute One Spot for Be-mag. After that we went back to Den Bosch again.

10.09.2010
After our shop meeting at RSI and some food the rain showed up again preventing us to film some street skating. The cool thing was that we could skate the nice skatepark in Rotterdam: Skateland. Especially Steve was so happy about this, he loves that park. And later that day – you know it – he killed the park. He was doing non stop hammers for around 4 hours, it was amazing to watch. But we were not the only rollers in that park. The scene in Rotterdam is constantly growing and they came a-flocking.

11.09.2010
Our second last stop of the tour was Eindhoven. This was easy for Steve, Warren and Matt because they were already there. We had a meeting with some slalom, recreational and speed skaters from Rollerblade. They were also in Eindhoven because of the big event “World On Wheels” which took place on the Sunday. With a big group we went to the city center, skated some spots together and after a while everybody went his on way. Rob had to shoot some footage with Greg, David was taking photos with Dominic, Steve and Warren were skating a ledge and I had to pick up my Mind the Gap setup because of the MTG finals that should take place the next day.

12.09.2010
It was planned to be a beautiful day with a lot of different skating, but it turned out in a big disaster. It was seriously raining almost the whole day. Only the last half hour of the event we found some dry spots to start a little session with some riders that didn’t go home yet. It turned out in a fun session with some sick tricks of Dick Heerkens and David. At the end of the session Rob also did some tricks on the Mind the Gap rails. That night we had to break down the Mind the Gap setup and I fixed a place for Tom, Rob and David to stay because they were leaving early back home the next day.

All in all: It was a fun tour and it was a great opportunity to get to know my team members better. We will be back on the road next year, maybe hitting the streets of your local city. Stay tuned for that and stay tuned for even more Rollerblade coverage coming up soon here on be-mag!