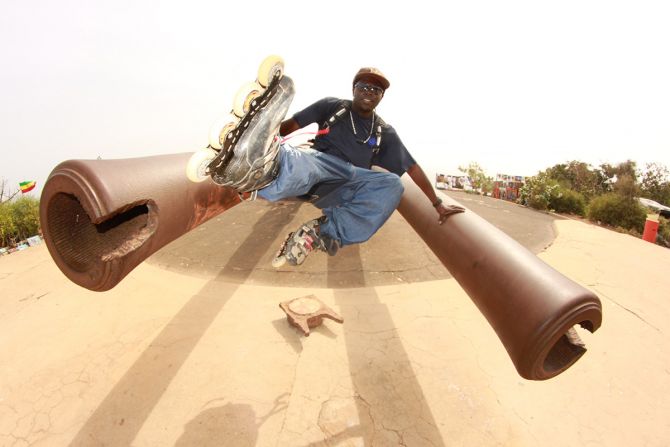 Write-up and photos by Oli Benet

A group of Senegalese skaters entered this house with music playing, and all wearing their skates, bringing with them some great vibes and smiles, and we immediately started communicating with broken English on their part and broken French on my part. Their skating and story was inspiring, and their shows the next day were incredible.

Nicolas De la Carrera was the man responsible for bringing them to Barcelona. Nicolas organizes non-profit events every year in the poorest parts of Dakar, bringing the streets to life with art, music and skating. With no budget, and working purely with sweat and help from anywhere he can get it, Nicolas manages to pull off something incredible every year. And ever since we met in Barcelona he made it his mission to get me to Dakar.

A mere 10 days ago Nicolas informed me that he had secured 4 tickets from Turkish Airlines, allowing two artists, two DJ’s and a skater from Spain would I like to come to Dakar for his Xeex Festival?

Fast forward to Dakar. Leaving the airport was already a shock. Hundreds of people walking around you, offering you taxis, phone cards, asking for money… I wasn’t even sure who was there to pick us up and who was there to sell us something!

As we approached the hotel in the centre of town I was again struck by things I wasn’t used to. Many people were lying, sleeping on the floor. Flat in the road, on the sidewalks, on the dusty dirty paths. As I entered the hotel room with 2 spare beds in my room I already felt guilty.

The next day we took a walk around the centre. Everyone was doing something, whether it was selling absolutely anything you could imagine, cleaning, repairing shoes – we could barely move. My experiences in the past tought me to look down, or away from people, so as not to encourage them and to be able to continue our walk.

Eli Manel, an incredible athlete and skater looked after us day in and day out. I was surprised to see he spoke to every person that offered us something. They exchanged smiles, hand shakes and conversation. Every single person received the same treatment. I asked him if he knew all these people, and he said “No, but you must be nice to everyone in life!”

My closed minded, preconcieved ideas were blown away, and I opened up to the idea of being nice to everyone who begged, or tried to sell something to me. Before long I was shaking everyone’s hand and failing miserably to communicate in French, but found myself smiling constantly. I soon saw that a lot of these people weren’t even asking me for money, many were just greeting me, or welcoming me to Senegal. My fear – caused by ignorance and preconcieved ideas – turned into a festive feeling of happiness that didn’t leave me from that first day until the last. Neither did the huge smile on my face that remained for the entire trip.

That same afternoon Eli and I went for a skate around the city, and he took me to the training area for Accro-Roller. I was blown away yet again as I found myself faced with perhaps 50 rollerbladers from the age of about 5 to 40, all skating, dancing, training, jumping and playing hockey on rollerblades that I hadn’t seen since the early 90’s. Many with wheels missing or worse. They told me as it was a week day there wasn’t many rollers but on weekends there was many, many more. We skated the high jump and sessioned some stalls on the tiny wooden ramp they had made as the sun set over Dakar.

I won’t bore you with the day to day details of the trip, but I will write about the event of the final day. To celebrate the ending of the incredible festival, the Accro-Roller crew did a show that included slalom and high jump. I was amazed once more, as these skaters showed aggressive style, and insanely high jumps and pure, 100 % passion. The children and adults watching the show screamed with delight and clapped after every jump, and with the music playing in the background and the constant flow of skaters, with the freshly painted houses – done so by French, Spanish and local artists – surrounding us, there was an incredible atmosphere. This was my last night in Senegal, and my smile was bigger than ever.

What a wonderful place. I feel happy and inspired, and hope this feeling doesn’t leave me anytime soon. I also hope to make it back and spend more time with my new friends.

There are too many people to thank, but I can’t not mention Nicolas De La Carrera, without whom none of this would be possible, Eli Manel, the man with the biggest heart I ever met, Baba, the father of rollerblading in Dakar, Accro-Rollers, The Conference (USD, Xsjado, Kizer and UC) for their support as well as filling my bag to the limits of excess luggage with products to give away, Inercia in Barcelona also for the product they gave me to give out, and of course Turkish Airlines, because no flight, no way!