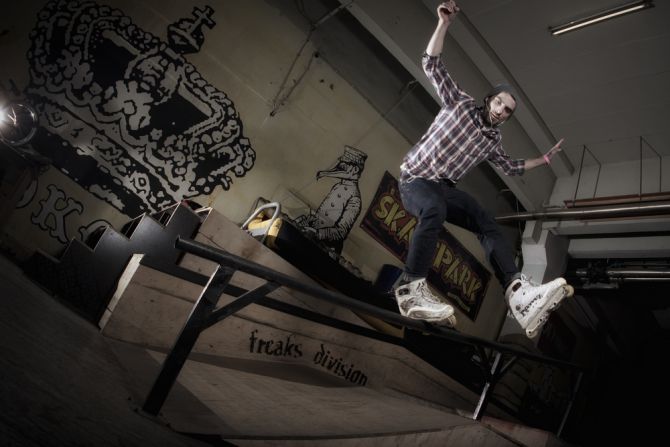 Older men and teenage boys in the Little shed:

– But just for a single joint.

– Can I come to your place, smoke weed and watch rollerblading DVDs with you tonight then?

– Sorry, I have to get up early in the morning and go to work. Maybe some other evening this week, ok?

While a joint was being passed around, an ancient greek romance about the love of a teen boy and his older mentor almost took place after the 25 and over session held last week in the Šupica (Little shed) skatepark, that recently introduced rollerblader only sundays.

The protagonists of this little skit shall remain unnamed, to protect the innocent, under-aged and the too old to be put on trial for smoking MJ.

Two weeks ago, I came up with the idea of getting us older skaters together, to session and document it for posterity, even though, as the over thirty edit on Be-mag showed, it’s unwise to expect too much from old, rollerblading beaten carcasses. Satan bless Mark Zuckerberg and his minions, if it wasn’t for Facebook, this would never have taken place. In the first half hour of me posting the invitiation in our local rollerblading group, almost ten people confirmed their attendance. Turnover – an astounding sixteen rollerbladers came and tried to shred. Some actually did shred, and some, well, didn’t. Instead of reminiscing of days gone by, when we would skate rails we won’t touch today, after the session, we packed up and left. Before that, we promised to try and do this at least once a month, or even every other sunday. Maybe we’ll catch up on the fortunes and misfortunes of our daily lives next time.

Oh yes, there were a lot of teen kids there, killing our buzz with their energy and skill. Fuck the kids, we are the scene.