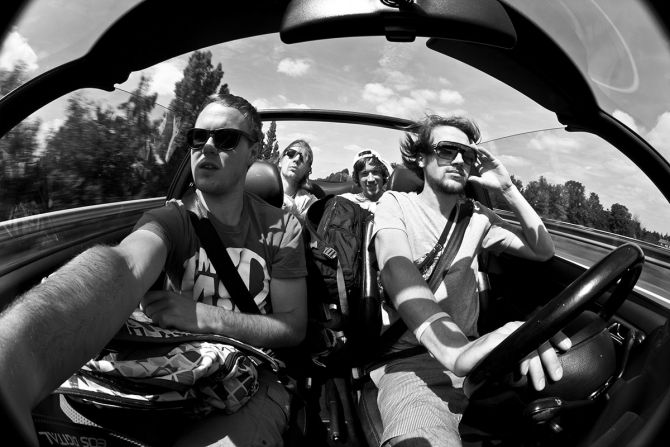 ‘The Breakfast Club’ touring through Belgium and France

Through the night we traveled to places we’ve never heard of before. Since we hadn’t arranged places to sleep – we are cheap Dutch bastards – we set up our tents on the most impossible places so we didn’t have to pay anything to nobody. When we hit the first village we met some guys from the Navy who showed us around and took us for a beer in a nearby bar. Our buddy Marnix decided to become best friends with the local drunk, a red bearded man. He wanted to show him something at his ”place”, and for some reason Marnix agreed to go with him by car. Luckily he did manage to return alive. Marnix convinced us the guy was legit so after spending the day at the theme-park we decided to visit him once more. His house turned out to be a huge mansion, where we all took a shower and hit the road fresh as always on our way to Lille.

When we arrived in Lille, some girl noticed us joking around in a burger place. She digged our vibe and took us to some fancy bars. Later that week we figured out the last place we visited, called the “Golden Wave”, turned out to be a gay bar. Turned out she was digging the “wrong vibe” in that one. Only Arne Elgersma had an above average time in there.

In Lille we skated with French rippers Clément Bee., Zemmour Amir, Adrien Zomara & Co. Clement showed us some French hospitality by inviting us over for a nice BBQ at his place. After we dropped Arne Elgersma off at the train station, the three of us headed to Tours to meet up with the one and only Freddy White who treated us like kings for the next few days. Besides skating, BBQing and partying we managed to get a sneak preview of the Frenchy Fries DVD entitled “Some Extra Sauce for your Frenchy Fries.”

On our way back up north again, we spent the night at a picturesque harbour city, Le Tréport, and got some final clips in Dunkerque the day after. Over there we visited our homeboy Cavin who was taking a holiday with his girl. Since the weather was shit we decided to go back to Amsterdam and get our groove on later that night at our local clubs.