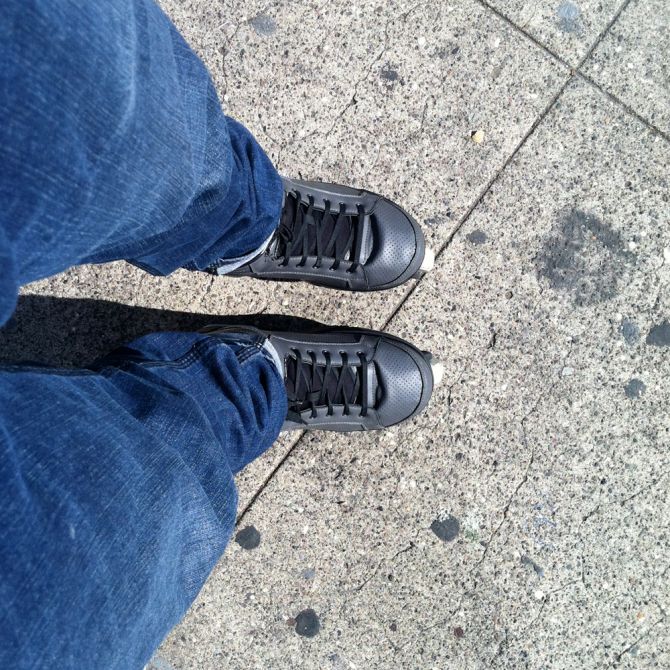 The Brian Krans Column: The Resurgence of Powerblading

Kizer came out with their Powerblading frames, and more power to them because it filled a void many bladers had: an easy, economically-sound way to get around without burning through wheels or quad strength to get to a spot. It’s a UFS frame that supports big ass wheels all over the place, much like the frames of old, including the Rollerblade Switch frames.

Don’t get me wrong, I love me some Kizer frames and Richie Eisler fucked up the world with his edit including the new Powerblade frames, but shelling out the extra cash for a different frame, wheels, and bearings does come with some groans just to “powerblade.”

For most of us growing up, this style of blading had no name. It was the way to get from spot to spot – skating. You didn’t switch up frames because, well, you couldn’t switch frames. You bought your Rollerblades, threw on some Senate wheels, and went around with about five bucks in your pocket to buy Surge sodas and Funyuns to get you through your day.

The closest we came to powerblading back in the day was when people moved from oversized Brian Konoske outer wheels and tiny C-Notes in the center, to smaller, harder wheels in a four down setup.

Still, the old, arthritic bastard I am, there are times I would appreciate the extra ease of cruising around on these new powerblades. Then again, I’m set in my ways.

On a given week here in San Francisco, I can log between 20 to 30 miles – or 32 to 48 km for the rest of you with a legitimate mathematical system – on my skates going from home to work, from appointment to appointment, and back home again. From rough, ugly pavement to train tracks and gradual uphill inclines there are plenty of moments where I wish my Colin Kelso Street Artists were a bit bigger and my Dyna B. Smith’s were a bit more forgiving, but that’s the way I do shit.

There are plenty of bladers here in the city of hills that swear by recreational skates for transportation and I sincerely entertained the idea when I first moved to San Francisco two years ago, but the idea of mile-high frames, insanely high cuffs and other shit had my Iowa-transplant ass shitting bricks.

Fuck everything about that. I’m sticking with my normal setup. I know it. It knows me. It’s a good relationship that I don’t want to fuck up by cheating on it with some second-hand pair of blades I bought at Goodwill, all jaded from being in garage for a few decades that they’re out for vengeance should some new guy think to stick his parts in them.

Around the Bay, I’ve hit up to 63 mph (101 kph) on an anti-rocker setup. For the record, ESG on a flat setup whipped right by me because he’s JSF el presidente that don’t give a fuck. I’ve cored the best of wheels and felt urethane turn to butter as I skitched cars. I’ve been in some really stupid situations because of my skates, but there’s a reason why I stick to the same setup, from session to transportation – unity.

The more you skate in your singular setup, the more you can handle. When you learn to bounce over train tracks, roll over cobblestone, or handle rush hour traffic via skitching, the better your regular skating will be.

Bomb the same hill daily in your anti-rocker setup and in a few weeks you’ll stop shitting your pants and start doing it fakie. Trust me. If my old, lame ass can do it, you can too.

The whole point of it all is that in a few short months you’ll be riding over that shitty run up you used to hate like it’s freshly laid concrete.

Really, fuck all of it. Powerblade on your own setup. It’ll make you a better skater. At least people will be able to tell you apart from the 1990s.

About the author: Brian Krans has been blading for half of his life. Now 30, he works as an editor at Healthline.com in San Francisco. His first two books, A Constant Suicide, and Freeze Tag on the Highway, were published by Rock Town Press. He also writes at www.bladeordie.com and is a proud member of JSF.