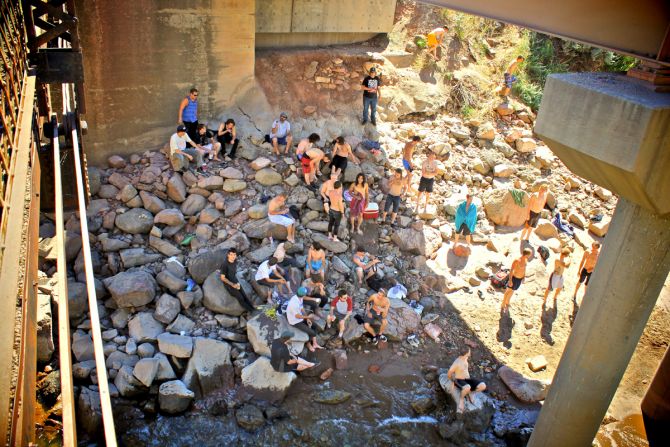 Following the short journey to the choice destination of the day people quickly piled to the edge as one after another the water became littered with sweaty, tired, and broken down rollerbladers clinging to their shorts. The scene looked something out of an old 70s movie as the vibe carried a brotherhood with bladers enjoying each other’s company in the shaded sand on the side of the moving current. After a few hours of laughs and beers it was onto the next stop.

Rifle, a town most would drive through, housed sixty hot and tired rollerbladers, all crammed into a rather small park just around the corner from a drug testing facility… Irony. Just about everyone quickly strapped into their helmet due to the local scare of police ticketing riders who didn’t comply with the rule. Seemingly, most rollerbladers would not care, but previous tickets draw in much of the fear. After a short while most decided they would rather cling to more shade and get into the local public pool. But, even with the intense heat a small handful stuck it out for what was one of the most heated sessions on the trip so far. This quite possibly may have been the point in which the most hammers were dropped. One after another riders slugged it out to top anything that was thrown. It was pretty awesome to watch.

Finally, as the day wound down riders ditched the spot to fill their stomachs and head off to the campsite. It all went deep into the night with more bonfire celebration and the brotherhood howled into the night. No really, everyone was howling. So, until next time, shred life and stay true.