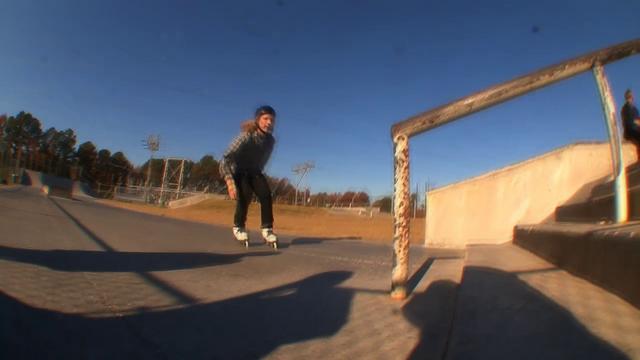 Up and coming: Ryan Timms

I met him before I joined the service, back in 2003 at Mount Trashmore Skatepark. Back then when you had to session street after park religiously, you remember? Well like most groms around the age of 12-14 he couldn’t convince the ‘rents to let him roam with the older guys. Instead of saying, “screw this dorky kid with braces that does frontflips!?” I decided then to not let someone so young who had just fallen in love with this obsession be left to putz around alone. And I’m glad that I did!
In between serving the country and trying to get my groove back he was out making edits seemingly every day! Actually took trips to street comps and competed in the last 2 Norfolk street comps I held. He went from p-rail annihilator/park rat to flowing like a pro and droppin’ legit hammers. But no matter what he always stayed humble and never got full of himself. He has held so many P-rail comps you’d think he was trying to bring the scene back via his driveway!
This is to my best friend of all time, an honest dude and committed rollerblader. He may be a college student now but he seems to be getting better during the time most people decide to hang up their boots and “move on”. Here’s Ryan Mutha Fuckin’ Timms, my boi.Oh yeah, by the way. He does in fact get money.

Best rolling edit you have seen in 2010 so far: Any edit with CJ Wellsmore

Good advice you’ve been given: “The Friendship that can cease has never been real” some quote we used for my DVD Life of Ryan & Scott and i plan on that being my next tat hah

Bad habit: My worst habit is probably bailing on schoolwork or other responsibilities to go skate, i dont smoke or drink so thats as bad as it gets hah

Worst injury so far: Well worst injuries would be filming for my DVD, tore all the tendons in my right hand then 3 months later snapped my left wrist and 4 months after that snapped my right wrist so bad i had to get surgery, a plate and 9 screws that im stuck with for life. going through a metal detectors is always fun

One thing you would spent one million dollar/ euro for:  An infinite amount of soul plates, ive been really reckless with my souls lately and cant find them in my size anyyyywhere

One thing that makes you really angry: People who lie

Reasons to smile: Tooooo many to name

Your favorite skater from back in the day: Dustin Latimer for sure

Skater of the year so far: Haffey hands down, dudes been killin it

Ryan preparing the cam for filming the sweet edit which you can see below:

Ryan Timms: Up and Coming from Be-Mag on Vimeo.