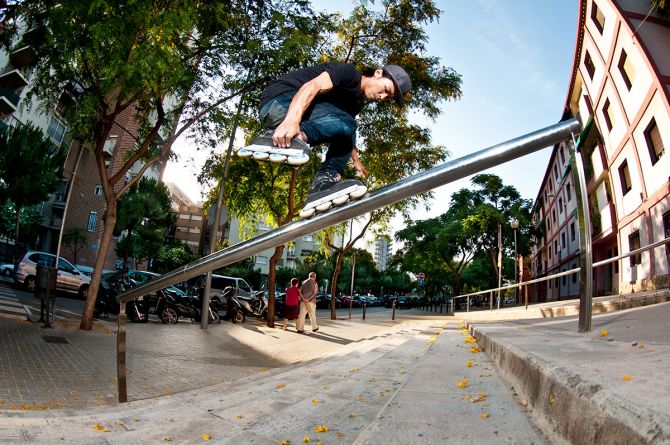 Oli Benet, who came up with the idea of Powerblading? How was the idea born?

When I moved to the centre of Barcelona about 2 years ago I ordered some UFS Syndicate frames from Powerslide to travel round the city with. They felt incredible. After so many years on an anti-rocker setup of 55mm wheels a flat setup of 80mm wheels blew my mind. I decided to give some to the pro riders that came through Barcelona on tour so that we could travel from spot to spot. It turned out faster and more fun than traveling by any other means.
When Powerhouse opened and Richie moved to Barcelona he came to my house the first night. I lent him some “Powerblades” to skate home with as we didn’t know how to get there any other way. A natural born rollerblader, Richie loved it from the go, and started using them to set himself up in Barcelona. When Dustin arrived, Richie passed on a set of “Powerblades” and they began to fly about the Barcelona streets, rapidly turning it from a transport system to a genre of it’s own skating, independent from Aggressive and Freeskating. Instead of using it to get from spot to spot, Dustin, Richie and others began leaving the house with only Powerblades – it was new, exciting and addictive.
The first time the word ‘Powerblading’ was used was in October 2010. The decision to make it a reality was November the 5th 2010 after we saw it taking over our skating more and more.

How much time has elapsed from the initial idea to the first production model?

Designs and ideas were presented at the end of 2010 and tested throughout 2011, perfectly in time for Christmas 2011!

What are the restrictions with Powerblades for Aggressive skating?

Well in theory not many. Richie has been doing torque slides, fishbrains, savannahs and backslides on ledges comfortably, however for those not Richie Eisler I can imagine h-block tricks will be tough. The thing is you can’t really class these frames as an Aggressive product. With Aggressive skating you find that creativity, lines and tricks are limited to a small area, or the focus is on a certain grind. It’s like comparing Parkour with Gymnastics in the Olympics, or fine art with street art. Powerblading converts the city into a blank canvas to start again. A fine Rollerblader can excel as a Powerblader, where maybe they didn’t in Aggressive. It’s a different idea, perhaps less technical, but faster, perhaps more creative, maybe even more ballsy, but you can take it as far as you want. Speed down a road at 30 km? Ride across dirt? Huge launches and wall rides? Higher stalls? It truly is a blank canvas, and a hell of a lot of fun!

Given that Powerblading frames are of a different height and weight than the frames Aggressive skaters are used to and also given that you’d probably ride them flat; how much does the average complete frame weigh? How much time did you personally have to invest to adjust to your new setup?

Well there isn’t too much difference in weight, the frames would be a matter of a few grams and the wheels… well they’re bigger, but so much faster! I would say the weight difference is negligible. As for setting them up, it’s just as it would be to set up any Aggressive frame. Bearings, spacers, bolts into the boot! The first time you try the new setup it feels like you are on ice, they maneuver in every direction and at double the speed you are used to. I guess the first 5 minutes you just trip out on the silent fluidity and speed of the whole thing, then you just duck down and speed off into the night…

How much are the frames and wheels and with what other skate models can they be combined?

The frames are UFS and can be combined with any UFS compatible skate. So far we have mainly used them with Xsjados which is very convenient and USD Carbons, because they’re sleek and light.

Which skaters have tested these frames, or Powerblading itself?

Starting in Barcelona at Powerhouse and after being skated by almost all the pro and am riders that came through the house many skaters have ordered a pair for themselves, including JC Rowe, Jeff Stockwell, Richie Eisler, Dustin Werbeski, Adrien Anne, Tim Adams, Mathieu Ledoux, Daniel Prell, Worapoj Boonnim and many more.

Groove tricks are fairly hard to perform with a Powerblading setup. But do you even use the groove given that the frames are really high and the angle that is necessary to align the frame sides and the backslide groove is very small?

Are you planning on developing a Powerblading frame with a groove? This kinda covers your earlier answer when you stated how Richie is able to do groove tricks, but also implied that it might be rather hard for the average Joe to do so.

The Kizer line for 2012 is moving away from the whole shared frame idea that this industry has grown up on. Until now almost every frame can be combined for different options without being the best for anything in particular, and we wanted to change that. That’s why the Fluid 4 is now only compatible with anti-rocker, and the Slimline 2 should only be used with a flat setup. Adding a groove to a Powerblade frame would make it longer and less maneuvarable, and I’m not sure it will even make it much easier to do h-block tricks on, it’s all about the technique.

Oli, can you tell us if there is a greater plan behind the introduction of Powerplading into the Aggressive skating scene? What kind of products are in the making and would you like your current customers to invest in Powerblading instead of the “old market”?

There’s no greater plan. I think that a few of us re-discovered the joy of rollerblading. There’s so much more to being someone who really knows how to skate than just spending hours at a ledge or a rail. Skating itself is an amazing rush, and the speed and distance you can get is similar to the high of landing a technical trick. Freeskating has often been described to me – even by Freeskaters – as people who like Aggressive but don’t really want to hurt themselves. Well, Powerblading opens the door for Aggressive skaters to take their will to take risks to another medium. I don’t think it’s a matter of new and old, it’s just another option… Again, it’s a blank canvas and it’s a heck of a lot of fun!

Is there going to be a Conference Powerblading team? Maybe in the sense of bringing together the best free and Aggressive skaters to form an elite of Rollerblading revolutionaries?

We are working on some competitions to scout out new riders, especially in the Powerblading sector. We think some people will really stand out and make a name for themselves. Aggressive skaters are fully evolved Rollerbladers, and having the added boost of double the speed and with far more terrain available, there is bound to be people that stand out.

The best Powerblading stories have almost all involved the Police. For the most part, especially in Eislers’ case, a Powerblader is almost impossible to catch. With new speeds and the ability to maneuver into any space and with quick turns made simple with a flat 80 mm setup we generally leave the Police miles behind, whatever form of transport they are using. Richie has some stories that leave your heart pumping with adrenaline. Another good one is the night that Worapoj invented “The Spiderman”. Look out for that one in an upcoming “Traffic” edit.

Let’s talk more about hardware. What’s the shape of the Powerblading wheels? Are they a round or a flat top? What is the construction like? Is it an actual air filled tire – like a lot of speed skating wheels – or are the wheels made of solid Urethane? What cores are being used?

They are made with the fastest available Juice compound with a severely reinforced core. They have a flatter profile than most 80 mm wheels of a similar type, but are still narrower than Aggressive by a long way. No air filled tire though!

What  differentiates Powerblading from Freeskating?

This is where I have to be careful! Freeskating could be considered – correctly or incorrectly – as the next evolution from Fitness. I have skated with a number of Freeskaters in the past, and one of the best I skated with – pretty well known actually – told me “I think what you guys do is amazing, I could never do that, Freeskating is much more safe… So I stick to this, your stuff scares me.”
The best Freeskaters to the best of my knowledge are also Aggressive skaters. Greg Mirzoyan and Anthony Finocchiaro etc. The fact is that Aggressive skaters, especially those who have been around a long time, know how to fall better than someone that has never had to deal with falling off a kinked handrail or roof gap. They know how to take a ramp or a launch, land a gap cleanly, stall or grind. And style is something that has been hammered into us since the beginning of Aggressive. “He has good style, he has bad style, work on your style…”
With Aggressive skaters, their style, skill and ability to save themselves like a cat mean that to unleash 8 x 80 mm wheels and all the doors this opens up can’t be considered the same category as Freeskating. Neither can it be associated with Slalom, which is also often associated with FSK, or Aggressive 100 %. It’s a blank canvas for some seriously talented rollerblades with no fear to maximise their potential. I would tentatively say that Powerblading might be a more commercial and focused evolution of Freeskating.

What products does The Conference offer for the Powerblader at this time?

Bearings of all types as well as the brand new Kizer Arrow, a metal/plastic combo, and the Kizer Advance, a Fluid style frame. Also as the parts are UFS compatible, all the skates from USD and Xsjado are compatible. Carbons make for an incredibly light ninja setup, while Xsjados are convenient, high cuffed, tough and well suited for the job. UC has perfected a super strong core that means there is now an 80 mm wheel that can put up with any abuse.

Why should anyone choose the Arrow over the Advance? What’s the difference?

The Arrow has a replacable wall, meaning it should last you forever. It also is harder/less malleable due to it being made of metal, so it’s better for abrupt skids etc. It’s also ridiculously strong, meaning you have a hard-ass strong, replaceable part frame. Either frame does a similar job, one is classic, light, simple and reliable, the other is built for pure Powerblading warfare!