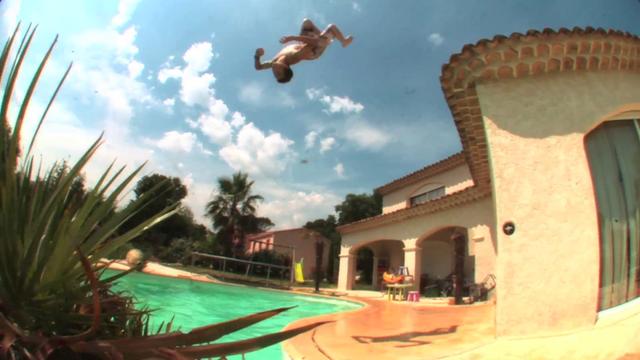 Be-Mag: Hi Adrien, thanks for talking with us about your new video Anonyme! How long has this been in the works?
AA: Hi, I tried many times to put a deadline but with injuries, money problems and other stuff it took me 3 years to make the dvd.

Can you give us a quick summary of the people and places we can expect to see?
The sections are: Julien Cudot, Tyron Ballantine, Fabio Enes, Diego Guilloud, Antony Pottier, Jacob Juul and myself.
It has been filmed in France, Italy, Australia, USA,Canada, Germany, Spain and more.

You’re well known for blading all over the world, and Anonyme is filmed pretty much everywhere. Should we expect a strong “tour with the dudes” element?
It’s mostly me traveling around to get clips from everyone as it is hard to make a tour with no support from the big brands in rollerblading.

Who’s involved in making Anonyme? Have you done most of the filming/editing yourself?
I’ve done everything myself apart from the menu and the cover, thanks to Raf and Duch.

Some videos put more emphasis on getting to know the bladers off the skates, and others ignore all that and only use footage of tricks. Where do you stand on what’s important in a video?
Yes, it’s hard to find a good balance between lifestyle and tricks, when you show only tricks it’s boring and when you show too much lifestyle people ask for more tricks, so I tried a good compromise.

Where did the name Anonyme come from? Is it a reference to the anonymous internet culture in blading?
It came from all the anonymous people talking on message boards. Anonyme means anonymous and could be everyone of you. Instead of talking shit or taking care of what’s new on the internet you could be skating like us and having fun doing it!

I checked back on those anonymous comments when the trailers went up, and there was a lot of USA vs Europe talk, as usual. How do you feel about that whole issue? Do you expect Anonyme to add fuel to the debate, or change minds about European blading?
Well European blading hasn’t much exposure, and I felt it was unfair, as we have good skaters too. I made this dvd to show everyone that European bladers are still here. But it’s not to say Europe is better or shit like that, I have nothing against US skaters and have good friends on the other side of the ocean.
There is no point doing a war between US and Europe, we have the same passion and should all work together to progress and get more people involved in the skating scene.
It’s easier to hate than love but I don’t think that we will get more people interested in Rollerblading if it stays like this.

So are you trying to reach people outside the blading industry? Was that an aim with Anonyme?
It’s not easy to reach people outside of the blading industry, I’m trying myself to do it, by having sponsors outside the industry that are known by everyone, like New Era. For Anonyme it’s the same, we have Muffin for example which is a clothing company coming from the winter sports. They sponsor Antony Pottier now, but as rollerblading is not in the spotlight at the moment, it’s hard to convince outside brands to help us, most of them doesn’t even wanna hear about us.
I have not the key to reach everybody. If so I’d do it, cause rollerblading is our passion and it’s a fun thing to do, more people should see it and try it.

Does that mean there are things about blading that put outsiders off?
We do have several problems like not having a real name for what we are doing like BMX, skateboard or FMX have. When you tell someone that you’re a rollerblader, they think straight about someone cruising around on blades like flashy dressed people along dikes in California haha.
We have to explain what we are doing, and then the guy who understood it has to do the same if he wants to talk about it to someone else. It’s easier for a biker, if you say “I ride BMX” everybody understands straight up.
Also we don’t use shoes so we don’t reach that market and brands like Nike doesn’t want to hear about us. Even worst they don’t want us to be part of festivals and stuff when they sponsor it.
But I don’t see much  about what could put people off blading, we are all concerned and should act differently,  help the new generation to grow up in a good atmosphere and make them proud of what they are doing.

Before we finish, can you share a funny or interesting story from the making of Anonyme that stands out to you?
There is too many stories to keep only one, the whole making of was a really good experience and even if I don’t get my money back from this project I’d do it again if I had to!!

Thanks Adrien! If you have any shout outs, take it away.
Well shout out to all the people who bought the video or will buy and everyone that helped me out in any ways in this project, to my girlfriend that understands me and to Grindhouse for the support as a skater!

“Anonyme” is out now in all good European stores and should drop in the USA any minute. Keep an eye out.