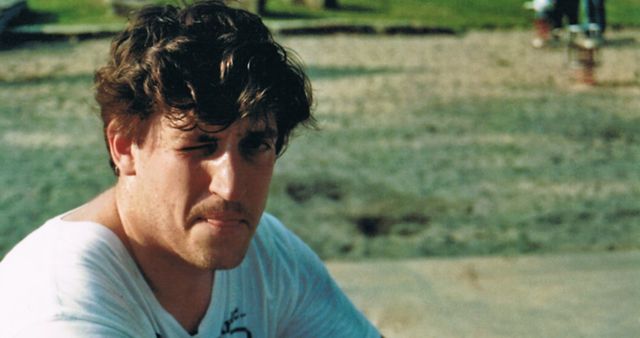 All Or Nothing: Patrick Justin Smith Interview

Be-Mag·September 4, 2012
Home
One-Off
Interview by Marco Herbst
Introduction, Photography & Video by Jo Zenk
Good morning Patrick. Let’s start with where you’re from, how old you are and how long you have been destroying yourself?
Born in Stillwater, Oklahoma 1982, raised in Kassel/Hessen in Germany. I started skating in 1994!

How did you get into rollerblading/aggressive skating?

Well, actually my older brother gave me the kicks for blading.  Since younger brothers always do what the older one does, I bought myself some blades after my brother did. Getting to the aggressive part of rollerblading was my brother’s fault too!!

You’ve almost been skating daily with your homies. I remember the good old time with TNR (The new religion) and how everything started with Grindhouse and Co. How was it for you, getting into the Pro scene?

After winning a couple of Redbull local hero tour contests I was pretty much in the scene. Yeah, let’s not forget the video contest in 1998 sponsored by GRIND magazine, that we won (Kassel crew) and Benni Harmanus came to Kassel to get a couple of shots for the mag!! Roland Wander and Konni Harmanus helped me out a little getting into the pro scene and Grindhouse n’ shit… It was a bad ass time and I wouldn’t change a thing if I could! so, I would say from my POV it was the time of my life.

Have you always been a street skater or did you come from park skating to street?

Than you went to America for a while. How was it for you as a German/American in the US, cause here in Germany you were the American in Germany. Were you the German in America and how was the scene in over there?

Hell yeah I was the German over in Dallas and proud of it. Who wants to be an American in America if you can be something else too. Brian Moore gave me the nickname “The big German” after a while it was just the big G. i loved it in Dallas skating wise. The level was awesome and skating at night with high temperatures with a bunch of rollerbladers felt so good. having sex after a session like that I would call that the perfect day.

Why did you come back to Germany?

I came back because it’s a fucking hassle to live in the USA when you grew up in Europe! I mean, don´t get me wrong, America is cool and all but it´s the little things that make a happy life happy. Hearing everyday on the Dallas news that at least two people were shot today in the Dallas area just makes you think! Or take the alcohol thing. When you´re German in your heart and you are not allowed to drink your beer wherever you feel like, it´s just not the way I want to live my life. And for sure more serious reasons too but I don´t want to write a book here.

When you came back, first you moved to Hamburg and then to Münster. How is the scene over their and how did you get to Münster?

Hamburg was great! skating with Mr. Stamer, Maurice, Deutschmann, Sidney, Basti etc. was a lot of fun and good skating! Why I came to Münster? Ask my ex-wife! I have been here for about 5 years now and i am glad that my ex-wife forced me over here, cause this is where I found my love (Vero)! and also, the skating rocks! I mean, it is not to far from Holland and the Ruhrpott. So I go skating with Jo Zenk, Xendre Glöber, Ben Bock, Jürgen, Maik, Parobeck, You, Lukas, Petry, Nacho, Koopmann, Kevin, Guido, Ette-Baby for example. Oh yeah, and Eugen, Jan and Adie. And when Jo Zenk moved to Münster, well it was the best thing that could happen to me skate wise!! When we started skating together, I felt the juice coming back, the passion for rollerblading, cause before I was more concentrated on making money and work! So thank you for that Jo!

If you guys have seen Hey Dude 3 back in the day section, you probably asked yourself: what’s up with that whole Arlo Eisenberg thing and Patrick Smith. So, are you related to rollerblade legend Arlo Eisenberg, even if a lot of the newer generations don´t know him. How is that now with you and him?

It is sad meeting rollerbladers who don´t know who Arlo is! UUhhh, I am not related to Arlo! But my brother is married to his sister Josie Eisenberg Smith. And this is how shit comes together.

What makes rollerblading so interesting for you that even in your 30’s you still have so much passion for the sport?

Ok, first the feeling! The feeling of doing a grind down a rail. nothing better than that! The lifestyle! The awkwardness! (compared to other sports) When i was a kid I hated team sports like football or basketball! I fucking hated it. When I was 6 years old I knew that I was not that kind of boy who wanted to do ordinary sports. I was part of an athletic team for a while cause I wanted to do something. Luckily rollerblading came out around the same time!

Rollerblading today is much different than it was during our time, what do you say about the scene today? Events and Contests?

Back in the days you were a bad ass doing a true soul on a rail during a run. Today, well, I think I’ll stop right here answering that question.

We saw each other at the 19th rolltogether in Duisburg a couple of weeks ago. There you saw a lot of old faces you’ve skated with over the years. How was it to see them all being adults, having family and kids, being serious?

Dude, Konni Harmanus has so much grey hair now!!!:) it felt good. Skating with my old team mates like Daniel Prell, Patrick Ridder, Andre Lepzy. Like I said, time of my life.

You work in the hotel business. I can’t imagine you in a suit and tie!! Isn’t that weird dressing up so different from what you usually wear?

Yeah, it is like changing personality for 8 hour a day! I hate it, but it´s good money for a not too hard job! Actually no, hotel management is a very hard job. That´s what I learned!

So, you are a full time working man now. What do you think for how long you will be rollerblading?

Hopefully forever! Heaven is a handrail…..

Thank you alot for your answers!! any shouts for the world?

Yesssssss! Janosch Novak, Roland Wander, Monte, Klemm, I miss you guys and skating with you!!! Hugs for the Dallas rollerbladers and Vicky and Essi for letting me skate at Eisenbergs Skate park for free and without a helmet. Hug for Josie for being Arlo’s sister and getting me all this free stuff . Hug for my Brother Chris Smith for being my big brother an inspiring me to rollerblading and a lot of other things in life. Hug for my dear ol dirty daddy (king asshole) and Mama Lu (queen asshole) Hug for my island brother Chris B. Hug for my step sister and Brent in L.A. Hug for my German sister who all of my friends want to touch and her boiii Martin, Hugs for the German Rollerblader scene, hug for my Mum for being a cool ass mum, hug for my step dad for staying with my mum even when she already had my brother and me. Thanks to you Mister Marco Herbst. And Vero my love, thank you, for being the first girlfriend in my time, who is not jealous of my rollerblades! I love you. peace out, fuck off now!