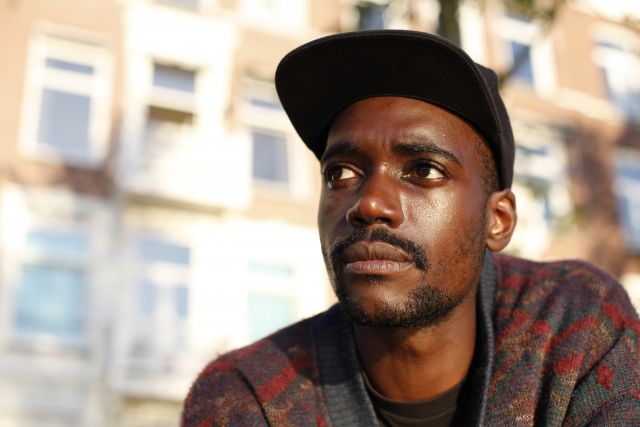 Sergio also happens to be a dedicated blader that has been at the centre of the Dutch scene for many years alongside his fellow goons and good friends from the V.I.C. skatescrew. If there is anyone that you could not possibly hate, Sergio is that guy. He will always show an honest interest in you and you will always want to him to be there at a session. With him around the air will be filled with rooting, applause, and a fresh new nickname, all for you. And, most importantly he will bring that good vibe to the session that makes blading so goddamn fun.

The actor on wheels first started rolling with like-minded “we-don’t-give-a-fuck-about-anything”-homies like Daan Hegt, Tyron Ballantine and Cliff Andriesse, back in the early 2000’s. Sharing their blunts, brews, and stunts together on a daily basis like they did back then, times have most certainly changed in 2012. Sergio explains: “My mind still wants to skate as hard as I used to do a few years ago, but my body doesn’t want to cooperate as well as it did back in the day. I turned 30 and I’m beginning to feel that it’s far more easy and satisfying to do a steezed out Top Acid then a Fullcab BS Savannah-to-360 Misfit, or whatever. That used to be my favorite trick!”

Age is one thing that of course troubles many rollerbladers in their enthusiasm to jump into big shit. With great age comes great responsibility and Mr. Hasselbaink forms no exception to the rule. Plain and simple: It is not an easy chore to turn off your mind-fuck button and dive into a drop-rail or death-gap if you are a well-established actor like this guy. “My job gets in the way a lot. I’m a full-time actor. I play in movies, TV-shows and theater productions. Every time I start a new project the producers make me sign a contract that basically forbids me to skate until the job is done.”

Sergio underlines the difficult matter of balancing work and blading, and also expresses his true love for the latter when I mention a question about the Winterclash. “I tour a lot, so I haven’t been to a Winterclash in like three years. It seems like every time there is a Winterclash I can’t go because I have to be at a movie premiere or film a scene. Don’t get me wrong, I love my job. But, I also really like the Winterclash [laughs]. Here’s a story for you. Last year, I had to play in this big theatre show and the cruel thing was that the show was going to take place at a venue that’s like practically next to the Area51 Park where the Clash was held. When the producers found out where I wanted to go they just waved the contract in front of my face and told me to go read Be-Mag the next day. True! Fucking! Story!

When Sergio is not rehearsing, studying lines, or getting saucy in girl-on-girl scenes he puts a great deal of his free time to get a good old skate session going on in the mean streets of Amsterdam. Unfortunately, this is not as easy as it used to be. Many veteran skaters are rarely on their blades anymore and the juniors are scarce and usually afraid of the streets. Nevertheless, the city does have a bunch of high-level rollerbladers. Sergio concurs: “I think the current Amsterdam scene is doing pretty well actually. We have a solid scene with some veterans and some young guns just like any other city in the world. The only problem is that the veterans are very picky in choosing a cool spot to skate. This makes the young guns hate on us for being lazy and such. But, it’s all good, though. We still have fun a lot. It seems like when I started skating twelve years ago there were a lot more rollerbladers than now, or even only five years ago. We are experiencing a little dip. On the other hand when I go out to the skatepark today I see more rollerbladers than woodpushers. That’s always a good thing, right?

When I ask Sergio why Amsterdam is the coolest place on earth a big smile appeared on his face. It is not hard to see that Sergio is an Amsterdammer in his heart and soul. Like many other bladers from this city we take great pride in where we come from. And, why shouldn’t we? There are numerous reasons why. Just ask Sergio.

“1. The nicest and most friendly people ever are here. You can walk up to anyone and just start a conversation or whatever. If you’re from abroad, almost everyone here in Holland speaks English: Amsterdam especially. That’s because we use subtitles instead of replacing the actors’ voices with a German or French one, which actually doesn’t make any sense at all. Did you know that in Germany they have one guy that does the movie voices of Bruce Willis, Edward Norton and Eddie Murphy? How do you like them apples?

2. The most beautiful girls of Europe are here. Yeah, I said that.

4. And, of course the option to smoke whatever you want, when you want. Whether it’s a good idea to smoke all day long it’s your own choice. But, the option is there.”

We could go on and on, but there is no need. If you haven’t been to Amsterdam yet, start booking flights. If you have been, thank you and come again. And get a session going with Sergio Hasselbaink. You will have a good time. He will probably bring his favorite bladers from town along. Sergio wants to throw a special shout-out to Hans Hardonk. “He always brings smiles and good stories to a session. I love that guy.” When it comes to a guy like Sergio you can’t really do anything but have tons of respect for him – a dude that still loves blading after so long and still rolls with the same dudes as he did ten years back. I’m sure I’ll still share tricks and smiles with this guy when he’s winning Oscars with Charlie Sheen and Asap Rocky ten years from now.

Sergio Hasselbaink performing in Sonny Boy: A dutch film that tells the true story of the “forbidden” relationship between Waldemar Nods (Sergio Hasselbaink), a 19-year-old student from Suriname and Rika van der Lans, a married Dutch woman in her 40s, and mother of 4 children. The pair meet in the 1920s, fall in love, and Rika becomes pregnant soon thereafter, causing a scandal with far-reaching consequences, leading up to the World War II.