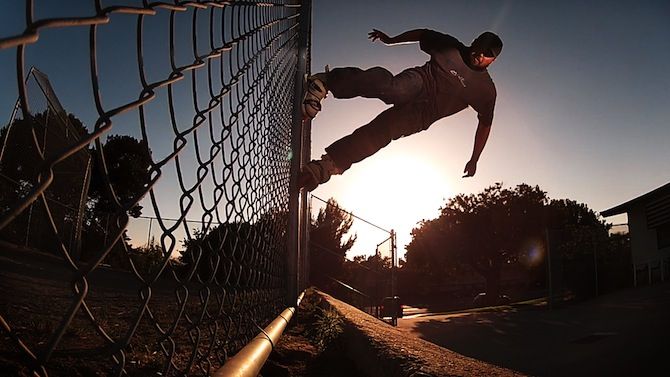 Beau Cottington: Bringing Back True Legends On Their Blades

Between the release of the OG Edit and the OG Reunion July 14 in San Diego, Beau answered a few questions about the project.

So, for those of them youngins who don’t know, who are you, where do you live, how long have you been blading, and how many (and which) videos have you made?

Beau Carlos Cottington, 32 years old. Been blading since 1991. I currently live in San Diego, CA but I was born and raised in Escondido. That’s a suburb in north eastern SD county.

List of my titles in order of their production:

What’s the story behind the OG Edit? Why now and why do you think it needed to be done?

I saw a bunch of other dudes like EZ@UWR and Be-Mag were doing 30-plus edits and it just seemed like something I could do, or at least have fun trying to do. I had no idea that everyone was going to rally so hard, seemed like the more footage I got the more it motivated people to give me their clips and be a part of it. After the second deadline passed, I started sending out a ton of messages trying to get dudes to send stuff in and hit up everyone on Facebook constantly. It worked, for the most part. I do feel that blading was lacking presence by the older generation, but all these guys needed was an excuse to produce something and a little poke in the ribs from their boys. There wasn’t a real “higher purpose” to the whole concept initially, but some have held it in high regard which makes me very proud and thoughtful of the potential and necessity of something like this.

The edit features some really big names from blading’s infancy. Did it surprise you that a lot of old blade heads were still going or do you keep up with everyone?

I started a group on Facebook called OG Bladers a while back and added every former pro and industry insider I could find. That was a great success in itself considering I just did it out of boredom one day. Everyone was friends already but FB is so cluttered it’s hard to keep up with people unless you put time into organizing… which not many do.

Once we had a clutter free forum, everyone was catching up and reminiscing, sharing their stories and opinions of modern and old blading in a private setting that got more of the old guys vocal and participating in the conversation. So before the edit idea even came into play we were feeling each other out as to who was still skating or not, etc.

So, going into the edit project I had a hunch who I could count on and who I could not. I had several surprises though that is for sure. That Tim Ward flip caught me off guard! Josh Clarke was still charging, which got me really juiced, I love fast skating. Blake’s steezy fishvert, Hardcore’s rawness, Tory with his fluid solidness, Mike O with the all-American soul.

I could just go on and on, it’s extra special to me because I know these guys personally and to see them still in love with blading and ripping is inspiring to say the least.

Chris Edwards? Yeah, that contribution made my day! Borja Fernadez came through big time as well, dude is so ill! Marek Doniec is not a well known dude here in the states but he is sick, kills the ski game too, as you saw in the edit… next time we will get some blading clips in of him.

Is it true that trying to get all of the footage from everyone was like herding cats wasted on bath salts?

I had 3 different deadlines, sent countless messages, some of which were never responded to… you know who you are, fuckers!

I planned on doing the OG Reunion on July 14th for several months, so I just wanted to have the OG Edit up by June 14th to give everyone a good reminder about the event a month in advance. I made a bunch of fake deadlines/extensions to get these lazy asses think they were holding up the show when I was really plotting it all along. Haha! Sorry my dudes, but a little sense of urgency never hurt anyone. Alex Miranda is the man in that regard, dude has his clips in fast and they are sick! The whole process was awesome from start to finish though, I can’t front. One major surprise was how much work it really was though, with over 50 contributors things got hectic fast and it was a big pile to sort though. That is my deal though, I ain’t complaining!

I wanna say thanks to everyone who filmed and contributed, countless dudes putting work! I am working on Olderblading v.2, look for it sometime in September. One Love!

The OG Reunion event went down on July 14th. Here is the new edit showing you what went down when Dustin Latimer, Louie Zamora, Blake Dennis, Arlo Eisenberg, Randy Spizer and some other OGs reunite in 2012.

More pics from the event here.