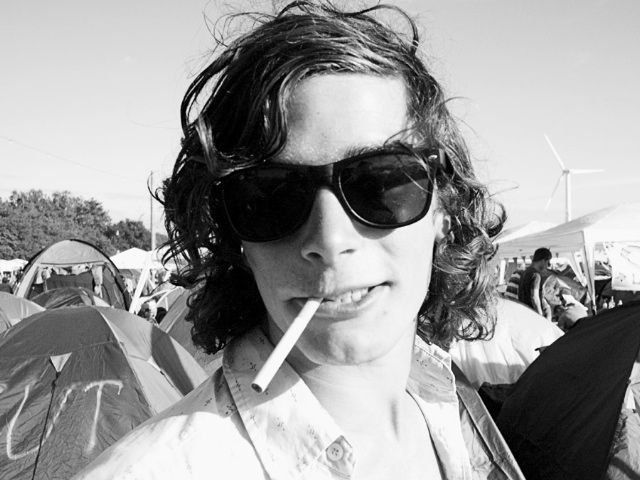 What movie are we watching right now?

Give everyone a brief synopsis of why they should see this movie.

Well, it’s just one of many really good horror films. It’s a good 1980s one. It’s more of gore film. You don’t have to wait fucking 45 minutes for some killing to happen. Fifteen minutes and the whole movie is chaos, so that’s pretty fucking sick.

So where do you currently reside?

It sucks. I can’t get laid and the weather’s bad. Next question.

Who do you skate for?

For a living, I sell marijuana.

No, I work at a shop. It’s pretty much a head shop if you’re in another state, but instead of just selling bongs, we sell everything, marijuana, too. We sell plants, all sorts of marijuana stuff.

Oh yeah, because for people in an international audience, in California, if you have the necessary medical condition, you can buy marijuana at a fucking store.

I guess it’s a real concern.

To get to the point of this, I know we’re getting ahead of the game, but this will run after…tell us about your pro skate.

It’s simple as fuck. It’s black. It’s not like the rest of the skates that come out with…well, you could just compare it to a standard fucking skate. No colors, no techno stripes and weird stuff that people do. Some companies just suck and put too many colors on their skates. It’s just a simple skate. It’s black and has Satanic symbols on it.

Getting a pro skate, that’s basically it in rollerblading. That’s the spot, that’s where you want to be. For being 21, which, sadly, in rollerblading is not old anymore. How that sitting with you? How are you dealing with that?

Pretty much, I don’t know, it’s cool. Getting a pro skate, is that what you mean?

Getting a pro skate is everything that I wanted as a kid. I guess I could successfully, uh, what, retire I guess and feel a little bit better for wasting all of these years with nothing.

Speaking of music, earlier you guys were playing. Billy’s on drums, Stokely’s on bass. You’re all jamming in your room. What’s going with that? You’re writing lyrics. Besides blading, you have music as a creative outlet. Tell us more about that.

We all blade together and listen to music together. We all played music. We all live in the same house, it was just inevitable that we were all going to start jamming, you know. One thing lead to another and another thing lead to another and now pretty much everyone is playing music together. Everybody played music already, at least me and DK. Austin’s done stuff. Erik’s been playing for a while now, but everyone’s in one house, so we get to jam everyday. And now it’s starting to shape into the form of, you know, you do covers of bands and their songs and eventually… We already have our own songs, but we just need to figure out, you know, keep the pattern going, having good times, and hopefully we’ll play some shows or something.

Yeah, I’ll go to those. Those would be some fucking insane shows to fucking get drunk at.

Yeah, they’ll be violent. Hopefully. I hope people wouldn’t just sit around and nod their heads. I don’t know, whenever I go somewhere, just the East Coast in me, whenever we go to a show, we don’t necessarily break everything, not punch everybody. We just like to go and have a fun time. Shotgun beers and have a good time with your buddies.

Everybody pushes everybody all the time. When it comes to skating, skating and music, pretty much everything we do, everybody around here, no one just sits, even if you’re watching a movie, one of our buddies will be getting ideas from that movie on how to make a sick ass creature out of clay or draw it on a piece of paper, which eventually turns into a T-shirt or a wheel graphic.

When we’re sitting down, even at the house, we never stop learning stuff. We constantly trying to learn music, learn stuff, learn how to do a bunch of things. It’s cool. Everybody helps get each other motivated to do stuff. Everybody on their own, at least I can say for myself, I wouldn’t do anything. I wouldn’t do hardly any of the stuff I do on my own. I would do the stuff, it wouldn’t be half as good as by myself.

Everybody helps motivate everybody, so it’s cool. Everybody pretty much motivates everybody everyday to go do some cool shit. We stick together as a team.

Yeah, you feed off each other.

Yeah, it’s not like just when we go skating. Obviously, we’re like Yeah, lace that shit, and we’re pumped when someone laces a trick, you want to go get a clip, too.

I know there’s always people coming and going out of the house, but you guys are looking at signing another six-month lease, right?

Yeah, um… I mean, you guys are trying to keep this thing going for as long as you can, right? Yeah, I mean, there was a lot of talk of people going, splitting up doing different things, but pretty much the main majority of people here are going to stay, from what I’ve heard last time.

Oakland’s a good place. We all have jobs. We’re all able to skate a bunch. We’re all able to play music. At lot of us all have the same taste in music. Once Daffick goes to Spain, that’s going to be a fallen soldier, but we’re probably going to have the same house or a different house. We’re going to be having fun, no matter where. We’re going to be having people coming through. Anyone we know, if they ask to come by, they’re more than welcome to come chill at our house.

Now that you guys have a resident tattoo artist, and Raph the pit pull hybrid, you know, destroying shit in the corner right over there right now, how many tattoos has Austin done for you?

Just so far four, but I do live with a tattoo artist and it’s kind of like you don’t wanna fucking cover your body in one week. You kind of need to pace it out, all these tattoos. Eventually, you notice, Oh shit! I just got like three tattoos in two days! I better slow it down. So it’s a good thing and bad thing having a friend here that does tattoo stuff like this. At any point you can get drunk and say, Hey, I want a turd tattooed on my ass cheek and he’s going to do it because you asked him. You wake the next morning, saying, Oh shit! Why’d I get this last night? I don’t have a turd tattooed on my ass cheek. You know, just some dumb shit like that.

Is there anything you’d like to add? I think this is a good interview so far and we should stop before we fuck it up.

Yeah, I usually fuck up a lot of interviews, too.

So no shout outs?

“What the fuck is a role model?”