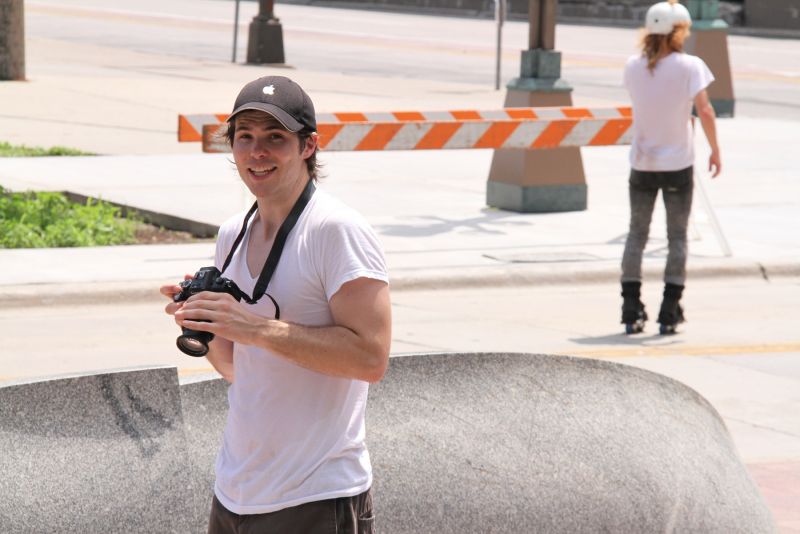 Biggest challenge putting the video together?

There were a couple big challenges for this project and both very different. The first big challenge was just getting everything ready on time. In the middle of editing I was also in the process of moving and finding a new place to live so it got pretty stressful and everything came down to the wire. The last week before we had to get it to duplication I was working all day and sleeping maybe 3-4 hours a day so it was a crazy last week.

The other big thing was before I started editing I decided that I was going to force myself to edit this video in the new Final Cut Pro X. It was going to be the first project I would do in this new environment and finding the right workflow was interesting to say the least. I will say I have grown to really like where the program is headed but it definitely still has some kinks and annoyances.

Is there a possibility that the video will be on iTunes?

Hopefully but I can’t really answer that one right now. We still have a lot of work to do before we can get to that point.

Explain your approach to putting together a video?

Well there are a few things. I spend as much time as I can watching the footage before I start to get to know what I have available. That way when I start editing I have a feel for the footage and know what I want to put where and which section tricks will go in. I think organization is super important so I make sure I am fully organized before I start cutting. Also trying to find the right music and work with everyone to find the songs we can all agree on is an important step in the process. I am really into videos that flow well so I look at every section and how it will fit into the whole and music has a lot to do with that. Finding the right pacing is important as well along with having a consistent look and feel to the video by way of editing and graphics. The rest just comes down to putting in the work and going through the process until you’ve found what your looking for.

Favorite section in the video?

If I had to choose I would say the montage probably. It is a really good song!  It is hard to be an objective observer though with a video you’ve edited. I would say there are clips here and there that I like or that I have an emotional attachment to more than just any one section on it’s own. It is about the style and feel for me more than just what tricks people are doing… or who/what section is best.

What have you learned through making The Hooligan Project?

I know it is kind of cliche but one takeaway is that you can’t please everyone. I know I stepped on a few toes not using all the clips people wanted me to use but as an editor with hours of footage I had to make the decision to cut it down to the best stuff and I did what I thought was best to make the best video possible. On that note, I did save some stuff for an online release to give some of our content to people for free. Online is a much broader audience so I think it is important to use every avenue possible to get the word out about the video and get people interested. Look for that on our tumblr blog beginning in January. ( hooliganproject.tumblr.com )

Who within the blade industry is doing cool video production in your eyes?

I think A.J. is doing some good stuff. I know he puts in a lot of work which is nice. It is good that someone cares so much about our sport. I really liked Charging. I don’t know if it is anything out of the ordinary production wise but to me skate videos are about feeling and Charging just had a kind of character to it and the right vibe you just don’t see in too many videos. Jon Jenkins consistently does good work. He is always trying to make things look good and look professional so I am into that. I could go on about more but that is enough for now.

What inspiration do you find outside of blading?

My imagination and dreams probably inspire me the most. I’m a bit of a dreamer and like to just zone out and think a lot. Also, I enjoy nature quite a bit so in between spending time locked in my office on the computer I try to get outside and go to the country whenever I can. My parents live in the middle of nowhere so I will go there and spend time hanging out. I like hopping on my bike and riding around the lakes here. Finding a balance between technology and nature is really important for me and helps clear my head a bit. Otherwise, reading books, watching movies and listening to music all inspire me in different ways as well.

Thank you Be-mag for the interview.

also for more info on The Hooligan Project: