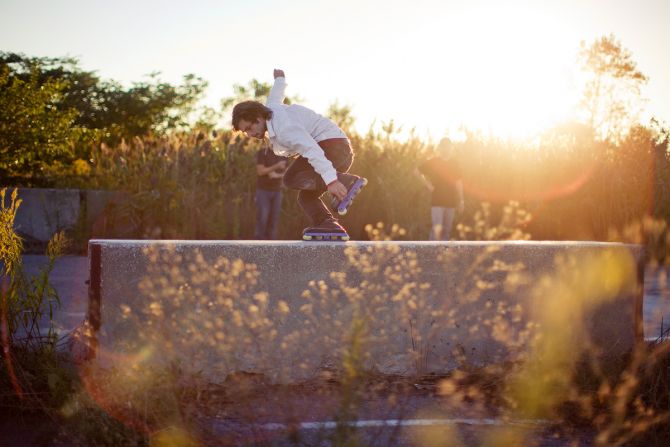 How long have you been photographing for?

It’s been about 12 years now since I really started focusing on photography, and that’s how long I’ve been rollerblading, too. Rollerblading renewed my interest in photography, but back then I was just having fun taking photos of my friends skating. It didn’t become a career until 5 or 6 years later.

How did you get into rollerblading?

Brink was actually my first introduction to it.

Where did the first idea of doing a project solely dedicated to documenting the detroit rollerblading scene come about? How long has the project been going?

For years my photography was mainly focused on my clients and shooting for other people. I wanted to do a personal project that actually meant something to me, and skating was just an obvious choice. I’ve been working on it for about 18 months now.

I noticed you set out some rules for the project, such as no flash, no wide angles, etc. How has these limitations enabled you to grow as a photographer? Have they hindered you at all?

The most difficult thing to do was to stop shooting for the trick. The rules forced me to look at everything differently. Every photo had to have a purpose, a meaning, or a way to convey skating in the context that’s in my head.
The no flash rule hindered me the most. If the spot was lit with streetlights or car headlights, I’d work with that, but sometimes it would just be too dark and I’d have to stop shooting.

Have you been shooting strictly digital or have you played around with film?

For this project, it’s been strictly digital but I love film as well and would like to shoot some large format film of skating sometime soon.

What are you hoping, from an artist stand point, to get out of this project? What do you think you have gotten already?

I’m not really sure, haha. I just wanted to do something to take my personal photography more seriously. This was a challenge for me to take photos of skating that said “this is what skating means to me”. I think it’s helped me to start thinking more like an artist and shoot with more intent behind my photos.

I know that you have facilitated the use of some social networking sites to promote the project, care to share? Have they helped in the promotion?

It was really cool to share the project on facebook because that introduced it to all of my clients and a lot of other people who knew nothing about skating. I’ve had several people tell me they had no idea it was still around and thought it was really cool. Actually some of my biggest supporters have been non-rollerbladers.

Note: Make sure to visit the Kickstarter of ‘The Rollerblading Project’ and become a backer if you’re down with the cause! The Kickstarter is running for another 9 days!