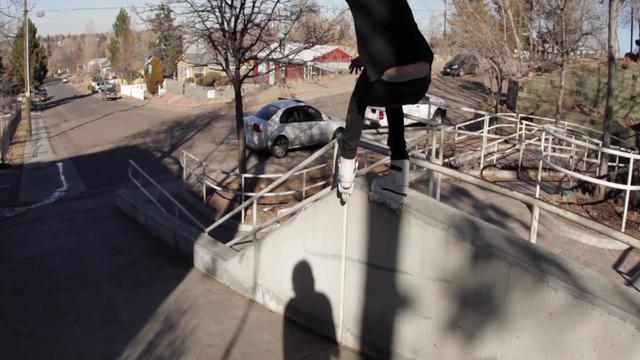 First off, introduce yourself as detailed as you like and don’t forget to mention your sponsors.

My name is Jeremy. I live in Denver, CO with my wife Sessy and daughter Arden. I install Cable and have been blading for 12 years.

How does having a baby affect your life as a rollerblader?

It makes me think twice about risking my body since I have someone who depends on me. Now I just look for the coolest looking spots instead of chucking myself on anything. I obviously can’t just skate all the time either.

What are the usual suspects you blade with?

How come you are the organizer of the TNR sessions in the Denver area and where do you get these amazing flyer ideas from?

I organize the TNR sessions because our scene needed it. James from Revolution’s Phoenix TNS’s and how big their scene has grown because of it definitely influenced me. I think every city should have some weekly session for all the bladers. That way kids can come and skate with people they normally wouldn’t and inspire people to keep it up or bring in newcomers to keep blading alive.
The flyers are just something I make to keep people interested. I just find random images from Google I think are funny.

Any sections or projects planned for 2011?

“Decade” the Revolution video. We started filming in Oakland for the Shima video but we’ll see if I get enough clips.

How did things end with the Razors guys? It seemed as if you didn’t fit into their team as much as the others did. Were you leaving Razors maybe a forecast of what – years later – happened to Don Bambrick?

It happened when I started asking about the AM team, this was in 2008. Icons had just come out and there seemed to be some confusion on who was who on the team. I would bug Geoff Acers about me moving up to the AM team since I had been “flow” for like four years and the only people on the AM team were Brent Hicks and Ski. He told me to write an e-mail to Andy Wagner and I did. So Andy called me out of the blue and basically went on some rant about youtube hits, going to college (I had already graduated) and I had no future in rollerblading. It was basically a fuck you from someone I’d only met a few times, but had promoted his company for years with edits and contests. It was a shock but also a glimpse on how this company is being run even though everyone else who works at Razors are amazing. I ended up talking to Shima about it and got on board with Nimh. As far as the Don thing is concerned, I think it comes down to Andy’s limited view on skating and how he thinks it should be. If you look at it some of the most influential bladers went through the Razors revolving door and got burned so go figure.

When will we see the next vampire edit?

Soon. But it will be more zombie orientated.

How can you afford such as sick place? We got to see it in one of your edits last year, what is your profession?

I install Cable for Comcast and do independent AV teching but we just got a sick deal on a house near the city.  Plus Sessy and I both have amazing families that always help us out when we need it so we do well.

What do you think about Shima Skate Manufacturing? Do you think that it will stay strong and establish a place in the rollerblading scene?

I really hope so. I think Shima is committed to blading and has a good idea on the direction to take it. The team and everyone involved are the best dudes in skating right now. We need a strong skater owned company at the heart of rollerblading to keep things real and grounded.

I am thankful to all my family and friends that support us and the crazy things we do. James and Gretchen from Revolution skateshop for saving rollerblading. Shima. And anyone else who has given me sweet shit for free just for blading.