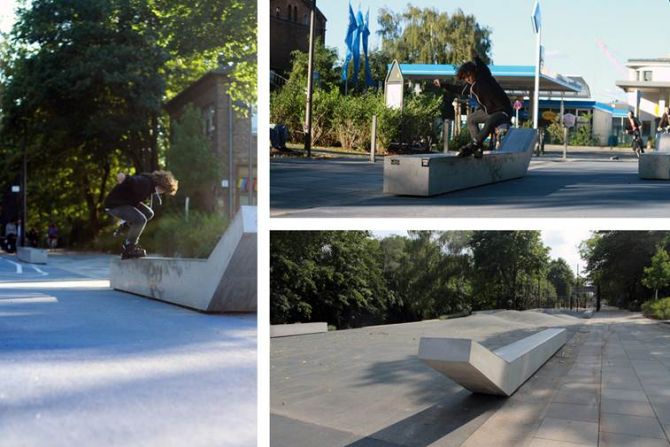 G’day Jojo and Dirk! You guys joined forces to hold a Real Street Event in Berlin. What motivated you guys to do it?

Dirk: Well I think it´s kind of natural process to do it… There are so many people here in Berlin who work for rollerblading and try hard to create a better image of our sport. Since I work for Hedonskate there is also a shop that wants to support events like that, not just money wise but also man-power wise! So my biggest motivation is to show people outside of our sport what we do and to inspire kids to buy rollerblades instead of skateboards or BMX bikes!

Jojo: We were thinking about it for a while now. Especially Dominik always said we should do something in Berlin again. When we found out that Montre and Bolino will be on tour after Roskilde we knew it was the right time to do it. Even though it’s a little spontaneous, we still think it will be a great event. It was definitely time for it.

Real Street Contests have become a rare treat in Rollerblading during the last couple of years. What’s the reason for this according to you?

Dirk: It’s probably because there are not many people out there who are willing to take the risk to organize something like this. You need to have the right connections to the rollerblade industry and to the scene, you need to have time to organize everything besides your regular job, and you don´t even earn a cent, so I think there are many reasons not to do it 😉

Jojo: I can’t agree with Dirk on that one. I always wonder why there aren’t more competitions like this. Organizing a Realstreet event is quite easy, since you only need to call a first spot and tell your friends about it. Today Facebook helps you to spread the word to whoever you want to and if you just try a little bit, you can easily get a few people over for your first event. And once the first event is over, things will develop if you push forward! So if anyone is reading this, go for it. It’s not that much work and you can do good for loads of your friends and maybe even some people from other cities. Just one thing: Start promoting and organizing earlier than we did 😉

Berlin is full of good spots – what spots did you pick for the Real Street Berlin?

Jojo: The first spot will be the well-known “Spot der Visionäre”. The curbs next to the river. The second spot will be a nice rail down some stairs – within walking distance from the first spot. The third spot still has to be decided. Right now we are planning something extra special, but we aren’t sure if this is going to work or not. We will keep you posted on that one! Check www.realstreetberlin.com for the exact address of the first spot.

I heard Jon Bolino, Montre Livingston, Josh Glowicki are coming to Berlin for the event. Who else do you expect to compete?

Dirk: Yeah man it’s amazing that those guys will come over! I also expect some polish guys, since the scene is so strong there and it’s not far from Berlin. I also expect a few Berlin locals and I hope to see many faces from rest of Germany!

Jojo: Today we can proudly confirm Nils Jansons as well, he will be part of the Hedonskate Tour – which is coming to an end in Berlin. In the next few days you can expect a few more international names and for sure Berlin and Germany in general will represent hard!

What do you offer the winners?

Jojo: The registration money will be going to the winner and next to that we got some goodies from our sponsors.

Will you extend this single event to a series if it works well?

Dirk: I think it would be awesome to have a series like that, but we will see what happens in the future, I don´t have proper plans yet… For me it’s very important to push the Hedonskating Sessions and in the future I would like to extend this session to other cities and not just Berlin! You know we do the basic work here… We try to get the scene together and make it strong. The next step for me is to get kids into our sport so we can start growing again!

Jojo: We started talking about future projects but nothing is sure yet. It would be nice having a proper Realstreet Series again. I´m a little bummed that no one tried to start something fresh during the last years. I think almost every big country in Europe has twice the amount of events than we do in Germany. That’s sad!