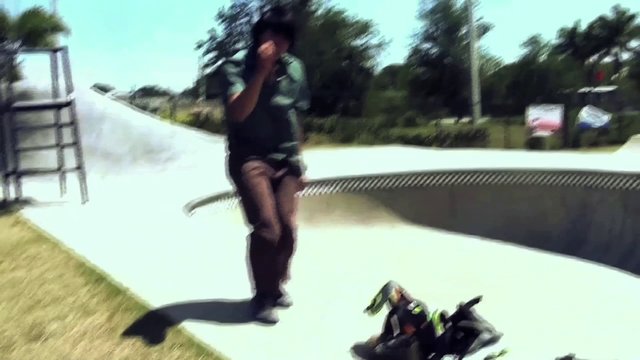 Kevin Kai Yee: Behind the mind.

Stay Fakey from Be-Mag on Vimeo.

The master and creator of Stay Fakey introduces himself as Kevin Kai Yee. “Kenji” was given to him by an old Japanese lady after she saw him shredding a skatepark, and it stuck. Mid-introduction, another part of his identity, he casually adds “I try to stay Fakey with and in reality.”

You’ve probably heard of Stay Fakey by now. The facebook page acting on behalf of both the brand and the nascent cultural movement that shares its name, is getting pretty active. You’ll see them regularly posting up edits of bladers they consider to be keeping it Fakey. Apart from the fact that they all shred hard, it can be difficult to see what they all have in common. Kevin explains their thinking in more detail:

“I think that every cultural movement has a philosophy or set of growing ideas behind it. The Facebook page of Stay Fakey has the purpose of planting those idea seeds. This cultural movement is happening all around me, and in me as well; I see rollerbladers all around the world, and especially in San Francisco where I call home, waking up to the reality of rollerblading.”

This reality, Kenji says, is closely tied in with his belief that the industry is becoming smaller and weaker, leading to bladers realising that the real point of it all is simply the enjoyment and love. The payout for sacrificing time and money and health is shifting from a kid’s “get sponsored + win contests = $$$” perspective towards the idea that blading because you enjoy it will still help you get better and be happy. These are the guys Stay Fakey like to promote.

As for the Stay Fakey name, there’s really no mystery there. Skating backwards is something we all do pretty often, one foot in front of the other like learning to walk. It’s this position, and the perspective it gives us, that’s important to Kenji.

“I chose the name because it’s the most beautiful position in rollerblading, in my humble opinion” he says, before adding a morsel of Kierkegaard. “We must live our lives forward, but we can only understand them backwards.”

Admittedly this is open to interpretation, but for Kevin it means accepting that blading as an industry, as a lifestyle, isn’t going to put skates on his feet or take any special care of any of us. A fifty-day break in Sarasota, FL spent meditating on how to take care of oneself and on the next steps we need to take as a culture. With a Fakey perspective on what went before, his vision for our direction in the future is clear.

“Right now our culture is a desert. There are some real oases, Eisler and the FishGuys for example, but in general a culture needs more than just blading dudes in edits with logos slapped on at the beginning and end, and the constant production thereof. A real culture needs music and art. It needs women, and bladies.com is a positive movement toward a feminism that’s missing in blading.”

He sees the lack of feminism in our culture as a part of a larger problem, with its origins in our separation from mass-consumed culture over a decade ago. While mainstream culture has moved through a lot of developmental stages involving gender and sexuality, for example, we’ve missed out on that as a rigidly separate, underground subculture. Even our estranged cousins in the skateboarding world are getting over their issues, featuring a transgender skater in a major magazine and putting Elissa Steamer in a videogame.

One of Kevin’s goals with the disciples of Stay Fakey is for them to “bring everything they love about life and pour it into this desert of rollerblading. All this growth towards open-ness and acceptance of difference that is happening all around us needs to be allowed in or we will remain a desert. There are places in the world where the phrase ‘Rollerblading is gay’ is nonsensical. Let’s work with them!”

Citing Mark Vanderboegh’s idea that we have to move forward, but slowly and carefully, Kevin insists on moving forward in whatever way seems possible, even if we move toward a cultural cliff while buried under a ton of rocks. It’s our best chance, and Stay Fakey’s driving ambition.

On a less metaphysical level, in case you were wondering who the main Fakey Stayers are, Kenji named ‘em. “Jason Greendyk, Tomas McGovern, John Vossoughi, CzAr, Gene Steegal, Tyler Noland, Cameron Talbot, Thomas Martin, BJ Burningheart, Hayden Ball, Danny Malm and myself make up THE DOGS. These are the guys with sections in The Wunderground.”

But of course, there’s more to being part of Stay Fakey than being in the video. My fumbling first attempts to grasp the Kierkegaard being thrust at me were met with open arms. “Getting it or not getting it?” says Kenji, “I don’t know! But Stay Fakey has a meaning that is open to interpretation and growth so you are adding to it right now. Love is the bottom line.”

So yes, the artists, the people building the website and shredding for the video are part of Stay Fakey, but so is anybody who believes that blading is for the love and the people. It’s not a club to join or a company that’ll sponsor you, but a cultural step forward that will embrace you.

Kevin, like most of us bladers, exists in a limbo between relying on the internet and disliking our need for it. “The internet is a strange thing. We need it to exist but its also an illusion, and if you read the comments and take them in like it matters what anonymous people think of you, then your mind is slippin’, you trippin’.”

So kids, drop your hands and maybe save your energy before commenting on this interview! Or for that matter, on either of Kenji’s recent videos “Start Loving Rollderblading” and “Stop Hating Rollerblading.” We got into why he felt there needed to be a difference between starting loving and stopping hating.

“Well shit talk in blading is nothing new. Its an old pastime people did in front of TVs while watching vhs blade flicks. But given the fragile condition of the industry and our art/sport/practice… I just don’t know why they vent hatred.”

I suggested maybe the signs that proddeed Stay Fakey into life were the same ones that the internet kids had interpreted differently. Shrinking industry makes kids look back to before their time at hammer-drop sections and wonder what changed. They can’t appreciate the positives of being underground and relatively independent. Kevin is close with two skateboarders who would agree.

“They would show me their videos and I’d show them ours. And I realized that they were basically doing the same thing I was, skating San Francisco to the fullest hills and all. So there was a sense of strange oneness. But on the other hand, they both complained about how skateboarding had sold out and had gotten so big that you had to be some freak of nature good skateboarder to get any sponsorship, or know the right people and be marketable. Grass is always greener.”

It’s also important to realise the importance of our small, super-tight community – as well as being able to show our skating off to a pretty large audience of people we care about, we can go anywhere in the world where there’s a blader, and have someone to hang with and a place to crash. That’s worth preserving.

The future is looking bright for Kevin personally, where blading and art could become even more tightly entwined.

“I’m applying to fine arts and media/interdisciplinary programs this year. There’s one in chicago called Columbia that I really want to get into because your portfolio can include anything from dance to drawing to whatever. They just want truly interdisciplinary creative people with loads of potential. Right now I’m working on my drawing to get it to that higher level also I am working on a band project called Kenji and the Baptist and finally I’m making a short film about my parents and their life here and also making the Wunderground.

The other day I designed and made a zen yin-yang heart rock garden for my mom, so I’m exploding with creativity and hoping to harness this burst into a graduate program starting Fall of 2014. To sum it up: “I don’t know if Stay Fakey is defining everything I’m doing but in a way it does. Because I don’t know where I’m gonna end up, but I know I’m in motion, I know I’m fakey, and I’m watching for rocks and cracks going down a steep SF Hill.”

We should all be.

P.S – I couldn’t let one more little thing pass without comment, and no doubt it’s the only reason some of you are even reading this. So:

Ash: Wait wait! Just one thing – the face paint, man. The public needs to know. Was it just a talking point, or was there more to that?

Kenji: I made that edit in a flurry of creativity. I happened to have some facepaint that i used in the XSJ video. I thought that since my speech was going to war against hate that it would be historically accurate – thinking of Me Gibson in Braveheart – to paint my face “STOP HATE.” There is also a history of face painting in blading, including but not limited to Sean Sea in the Apples that Fell Far From the Tree… But the short of it is: I painted my face cuz I felt like it.

And (apart from accusing Braveheart of being accurate in any way) I couldn’t agree more with him.