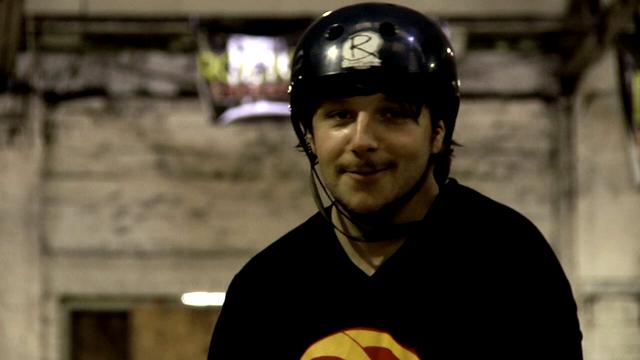 RP, give me some stats, please. What are you all about?

Rob Pruett, 24, male, from south Wales, UK. I love to travel, music, cliff jumping, BBQ’s, partying, beer. Erm… at the present I’m all about getting clips, rollerblading, living my life to the full potential.

So in your 13 years of blading you must have picked up some injuries here and there, you wanna reel off some of them?

I’ve broken all my fingers on numinous occasions, both wrists, I had a hematoma on my spleen, been in a coma twice, bled from the ears, disfigured my elbows and knees. Broke my jaw, cheek bone, nose, ribs and over 100 stitches. Dislocated larynx.

I guess I should have just asked what you hadn’t broken. That’s a pretty long time and a long list of injuries, what changes have you seen in the 13 years that you’ve been around?

When it comes to changes, styles have changed. People have come and gone, the way people skate today, it’s all about the style. Where as a year or two ago it was a lot about spinning onto tricks with maybe a rotation out as well, but now it’s more about the style going into tricks, style in between and style coming out of tricks. Rollerblading has took a dive over the years, just not getting involved in corporate sponsors, the sport has not had chance to grow to its full potential. Which is good in some ways but if there’s no growth, people can’t get to see it if it’s not there.

I try to do things that no one else is doing because it leaves a shock/it gets a reaction. Also people outside of rollerblading see the bigger you go… they think “Wow, how did they do that/how can I get into this…?” Even if I’m not up there with the best, I like to do my own style and do things that people think “Oh my god, that shit was crazy, that shit is tight!”

You want people to watch rollerblading and ask how did you get involved. So how did you?

I started just recreational skating in the streets on a pair of plastic wheel Seneca skates and then I went to my parents, down to a local beach resort called Barry in south Wales and I looked over a wall and there was a metal outdoor skate park and I saw a guy with green Bauer Stancity skates with a cast on his arm trying a grind down a pole. And for me that was it, the inspiration… Even though he was injured, he carried on busting out a big trick. And that guy was Richard Taylor. Rest in peace, homie. After that I just started buying magazines, Unity, DNA, Inline Skater Magazine and Daily Bread. Then I started learning to grind and that’s when I got my first pair of skates with grind plates , they were blue cuff Roces Romes. Then I started going down the local community centre building ramps with friends and trying to skate rails and as time progressed, more skate parks started opening and I started going and it just built up from there.

So the guy who you first ever saw on skates turned out to be Richard Taylor and he seemed to have a big influence on you, growing up in Wales, do you see a bit of rich in your skating now?

I certainly hope so ’cause I like to skate with the same characteristics as how he skated. He was always happy when he skated and always had time for other people and man he went big! Rich was renowned all over the world and I was blessed to get to know him, gain his trust, gain his friendship. He was a good friend to the end. When I had just come out of a coma, he came and saw me and I was overwhelmed. A few days later, he went in, he unfortunately didn’t have the luck that I did. Rest in peace. We still miss you, homie.

So we’ve talked a little bit about the past and the RP from the beginning, now what do you think rollerblading holds for the present and the future?

Definitely more broken bones, there’s still life left in this boy. Definitely things that are going to catch peoples eye. I’m going to try to hold that down for a few more years. A future prospect for me would be, as I get older, to possibly open a skate academy. Similar to Woodward for skaters in the UK to attend and learn, I would love to be able to do this in conjunction with Rampworx Skatepark and any other big sponsors that could help rollerblading grow and teach people about skating and all different aspects of it.

That’s a pretty sweet ambition to have. It’s not something you hear from people every day. It’s something that, if people get onto it now, it could really happen. You mentioned Rampworx – in what way have they helped you out ’cause they have been backing you for a long time now?

When I first moved to Liverpool they gave me the opportunity to give back what I had been taught through rollerblading and put it back into coaching kids, adults of all different ages, it also opened the window to my current job as a support worker. Because of working with people, I realized I’m that kind of person who is caring and likes working with people who need support in their day-to-day life not just in skating.

So there’s a couple of big events again at Rampworx this year. One being the Chaz Sands Invitational in June. Is this your year again to shine with another dramatic leap of faith?

Well it’s my home park and I like to let people leave thinking “Shit, what the fuck did that kid just do?!” Obviously I’d like to possibly just get my name mentioned and known not for just being someone who was just there and actually have an impact on how people perceive competitions and how rollerblading comes across.

So you also ride for Fenfanix. I appreciate what those guys are trying to do and what they’re trying to put across. How do you see the company progressing?

Well the guys I’ve spoken to at Winterclash they have got quite a few big projects this year which are going to be quite sick. Obviously as you have seen on Be-Mag or other skate sites or competitions they will be bringing out new wheels which I am quite excited about. The first batch of wheels which they brought out were a learning curve. The new wheels they will be bringing out will match everything out on the market right now. Due to the mould and speed it will be a big hit everywhere, in the states and UK. Love you guys.

At some point we need to try and get out there and visit the guys and get some clips out and about in Europe. You got any other projects you want to get done this year?

Well Ricky, as you ask this, we’re working on one right now. We’re trying to bring out a DVD by the end of the year, helpfully with me doing some crazy ass shit for the kids and also we’ll have some other heads on this DVD. We believe it’s gunna be one of the biggest UK DVDs to come out in UK in a long time.

Any plans for travel this year?

Erm… I plan to go away and film up in Cali hopefully if we can get hold of Fallon. If you’re reading this, holla back at me so we can organize this trip. We need a place to crash y’all. I don’t really talk like this.

You’ve met so many people in your life, is there anyone you’d like to thank for making this happen?

Yes but there’s quite a lot of people I owe thanks to. Past sponsors, Steve Bass, Steve from Proline. Hospitals for having me. Present supporters, Paul, Mark, Ian, and Rob at Rampworx. My mum and dad for supporting me in anything I’ve ever wanted to do. Friends who have come and gone and are still here.  Aka my best homie Richard Johnson and all my local homes. You know who you are. I’d like to thank my girlfriend for putting up with me.

Thanks for the interview, Rob. One last question though: what’s your top 5 inspirational people in rollerblading?

So that pretty much wraps everything up. Kids, if you haven’t heard anyone in this top 5, not including me, then get searching on Be-Mag!