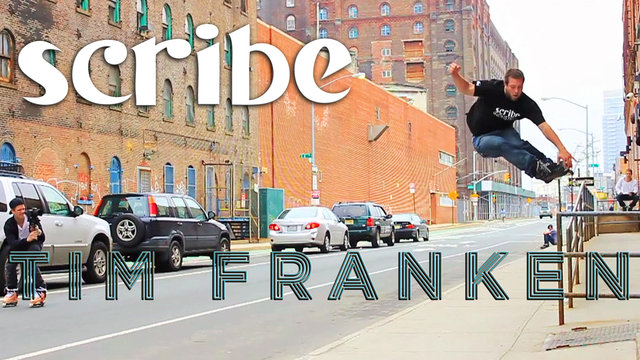 This is Tim Franken’s Scribe Industries Online Profile and last tricks filmed in New York City. So I called Tim Franken up for an exclusive interview with Be-Mag.

“I also moved because of the weather… Skating seven months a year indoors with terrible skate parks wasn’t working out when trying to pursue this as a career.”

Franken then went on to explain how he has a strong love for New York City and New Jersey that this will never change. He simply wanted to expand his horizons and search for new opportunities. “New York City is always going to be my home. A place to go back to… Where I feel welcomed.”

Before Tim left for California, he made a stop in Florida to compete in the annual Panhandle Pow Wow. He ended up winning his qualification round and made it to the pro comp. “I won the best trick and within the first minute of skating the AM qualifier they told me I made it to the Pro round… I kinda flaked on the Pro Comp this year. I had a terrible 10 minutes. It happens… Kona was like an amusement park. Something like Disney World… It was interesting to see what went down there.”

23 year-old Tim Franken has been frequenting the Florida blade scene for years now and has certainly made an impact on the skaters there. When asking him about the caliber of competitions held in Florida and/or by Central Florida Rolling Tim states, “The competitions ran by CFR or even by Blake are most definitely organized, they have their stuff together, and people respect what they are doing.  They get a lot of support from sponsors. Any event they throw is sure to be a good time.”

Franken certainly notices big differences between the New York City and San Diego scenes.  “You are more likely to skate with the top guys in our industry out here in California. When I got out here the very first person I met was the dude Justin Eisinger from ONE Magazine. You don’t just meet guys like that out skating in New York City… Every place I go skate I see top industry people. The number of participants (number of local bladers) is less out here but the intensity is much higher… There is much more room for opportunity.”

The move from the East coast to West has surely been a positive influence on Tim Franken’s lifestyle and career goals. Franken went on to explain the availability of parks and spots compared to the East Coast. “Within a half hour of my house I can go to 5 or 6 ridiculous skate parks… You have no idea!”

I wanted to ask Tim how he felt about being sponsored by such reputable companies as Remz and Scribe. “I feel blessed with the opportunities, honestly. Due to the fact that there are so many skaters out there ripping it up everyday, I’m fortunate enough to be apart of these great companies. It’s a boost of confidence for me… My confidence and skill level, I personally feel, has doubled. These guys (Kato and Dan Fabiano) like what I’m doing so I’m going to put more effort into my progression.”

Franken is thrilled about the inviting scene that San Diego has to offer and explained how there are no cliques or crews. He insisted that everyone from the East Coast takes a trip to check out what the West has to offer. The San Diego lifestyle has certainly taken a hold of him.

“Rollerblading is my release.”

Visit Scribe Industries website to find out more about the company!