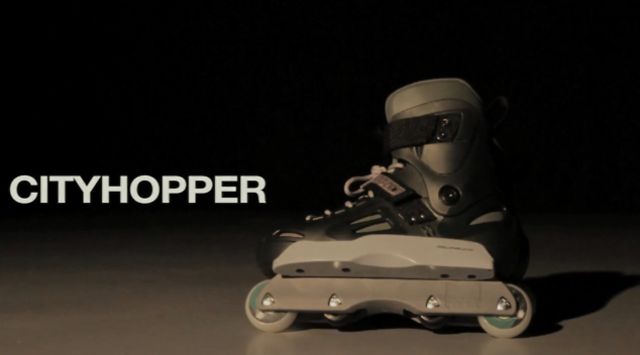 Sven, you are in this new project called ‘CityHopper’. Can you tell us what you are doing and tell us your perspective on what went down?

It all started when I received the prototypes of my new skates. I wanted to make a new video of me testing the skates. After chatting with my friends, Remy Cadier suggested to approach this video in a non-traditional way. “Why not skate spots you would normally not think of” was the question. I was inspired by this and we started to develop this idea further.
Before this I already had a spot in mind I wanted to skate; one of the bridges in the Red Light district in Amsterdam. To do this I needed a small wedge ramp which could launch me to the rail. As I was trying, more and more people stopped to catch a glimpse of the action. I’m sure some of them were hoping to see me get up close and personal with the smelly Amsterdam canal water! It took me a couple of attempts to get through the crowd and gain enough speed on the cobblestones to actually lock on the rail, but finally I did manage to lace it cleanly with a basic Backside. Remy and Axel were both filming, but there were also a lot of people capturing this event with their smart phones. Next day I received an email that somebody had uploaded his video on a very popular Dutch “funny video”-website which is called ‘Dumpert’. Because of this video a lot of non skaters – like my parents and friends – also saw the video.
This kickstarted the project and gave us the confidence to expand the project. A large jump ramp was built and I thought of a bunch of extraordinary spots I wanted to skate. We decided to hit up 8 of Holland’s largest and most well known cities to give them the ‘CityHopper’-treatment.

This whole project seems a progression, even in comparison to where skating has gone before, at least in the sense of going bigger, literally. What were you trying to achieve by skating these spots? Is there a specific goal in mind?

By using the ‘CityHopper’ ramp, the number of spots I could skate increased by a tenfold. Suddenly I could grind on, or jump over objects that weren’t possible before. It almost seemed like a computer game. Visiting these spots with the crew was a blast – a guerilla campaign every session. We just wanted to capture the most crazy stunt possible, and of course capture and broadcast these in a strong way. Appealing to skaters and non skaters, and possibly giving a new impulse to blading.

What kind of spots were you looking for? Did they have to be previously known by people or did they just need to be top notch and unique? How did you go about selecting your spots?

We only wanted to use the most touristic and iconic spots in Holland. So one weekend I went to all these cities with my girlfriend. She went shopping and I went spot checking. I took photos of each spot, checked the run up and if there was any form of security. There was only one spot where we had asked for permission to skate. This was at the Pier in Scheveningen because this is private property. As for all the other spots – we just went there and hoped for the best. We also got in trouble with the police a couple of times, but the more spots we skated, the faster we went about our business. Setting up the ramp and cameras, doing the trick and chucking the launch box back into the car. Even when the police arrived we had most often already gotten our clips and were on our merry way.

Which famous spots have you skated in your profile?

In total we skated 34 spots. Like de Dam in Amsterdam, PSV Stadion in Eindhoven, de Dom in Utrecht, de Pier in Scheveningen, Binnenhof in Den Haag. I understand for foreigners it’s doesn’t sounds that familiar but if you watch the video it’s almost like a commercial promoting Holland.

What can we expect in the media from this project?

There will be two edits to look out for. First off we will release a regular length skating edit. We will also be releasing a documentary style edit with an interview of myself, Randy Abels and Tim Haars, well known in Holland and Germany for his roles in ‘New Kids Turbo’ and ‘Nitro’. This longer edit will also cover my skating career in a nutshell, and share some of the fun times we had while filming it.

Is ‘CityHopper’ something you are hoping others pick up on and add to it all?

Well, if so it’s cool, but it’s not something I am hoping for. For me it would be fun to do this project all over the world. ‘CityHopper’ reminds me of the movie ‘Amelie’, when her father receives postcards from that dwarf. Every time from a different city in the world, but every time it’s the dwarf in the photos. I feel like that hyper dwarf!

What are some difficulties with a project like this? I can see how something like this could create more of a chance of getting injured. How has that played out in all of this? Did you have some encounters with the police already?

We got in trouble with the police three times in total. The biggest problem was the scooter or car that I used to gain speed for some of the tricks. Speeding on the sidewalk with about 60 km/h. was something they didn’t like very much. Also at one spot I almost got arrested because it was a really old building in Amsterdam which was on a special list for old buildings. This building was also the headquarter of the Dutch Military Police. Go figure. In total we had eight days of filming and skating. Every night after the shoots my body felt more dead than alive. I needed to rest a bit after every shoot but nothing bad happened. Only during the last trick of the tour I landed really hard on my heel and couldn’t skate for a month. Walking was a bitch, too!

What was your favorite spot? What is it now and how, if at all, has it changed?

For me the favorite spot was the Dam in Amsterdam. As this is the most familiar spot in Holland for Dutch people. Maybe not my hardest trick but I was pretty scared that the police was not going to be happy if I would jump off this historic monument. There are always so many people walking around and then suddenly there’s a skater on top of the monument. When I stood there it felt strange but cool, too. I took off my sweater and underneath it I was wearing a Dutch football jersey to keep it completely Dutch.

“He jumped a fucking plane!” Those are the exact words that left my mouth when I saw it. In the video some epic stuff certainly goes down, but what brought things to this level?

It first started small but as we were doing the shoots we got more ideas. The plane jump exactly wasn’t planned but on Randy’s birthday party we met this guy from Leystad that was saying his cousin just bought a hangar with a plane inside. We asked him right away how big and high it was, and how the run up looked, if it was possible to jump etc. He phoned his cousin and two weeks later we drove to the Leystad-airport and did it.

What was the most dangerous stunt done while filming? How did you get past the fear factor?

For sure the Pier in Scheveningen. I was doing a fishbrain on some construction in more than 2,5 m height. The scary part was that if you missed the trick I would fall pretty hard. The square metal ledge and the run up were horrible. Luckily we had Gerben on his bike. He gave me the speed I needed and we brought some pieces of wood along to make the run up more smooth. So only five meters before I hit the ramp I could focus on the trick. For this shot we also used a crane, together with the beautiful sunset and being 50 meters into the sea the shot turned out great.

With a structure this size it is obviously tougher than just showing up with skates and sliding a rail or gapping some steps. We’ve all had experiences where police, security, or other authority individuals created some difficult circumstances. Did you come into any brushes with the law while filming?

We planned everything well and at every shoot we were with at least six people. Two to three people filming, two taking care of the ramp, one driving the car/scooter and me lacing the tricks.
Most of the shoots were a five minute thing. “Do the trick and leave before the police shows up.” This happened a few times but they were stressing more about the scooter that raced through the city than the jumps I did.

Is this just a phase or are you trying to do something new with skating? Will we see “regular” skating happening from you or is this the next step in your own skating progression that will carry out further?

Haha, of course I will continue “regular” skating, I love skating. But I would like to do more stuff like this when possible. The jumps I was doing with extra speed from a scooter or car felt awesome. At this time it just felt natural to do these tricks. Who knows where it ends, it might be a phase – or not.

Obviously you did this because you loved the idea and had fun. Was there anything you really didn’t like? Something or some things that just really bothered you while doing this project?

Not at all, everything about it was just so great! Going from city to city with friends, with this ramp, skating totally new spots and doing stuff nobody skated before was epic for everybody involved, especially for me. Even though my body hurt sometimes because of the impact of the jumps.

What are you doing every day when you aren’t “city-hopping”?

I’m working for Rollerblade as their European team manager, organizing events like the Dutch Championship and for my own company with which I’m doing the ‘Mind the Gap’ contests and shows. Between all of my work I try to skate with friends a much as possible.

Any think the readers should know?

There will be a small surprise in the edit for the German, Swiss and Dutch viewers. At least those with good taste!